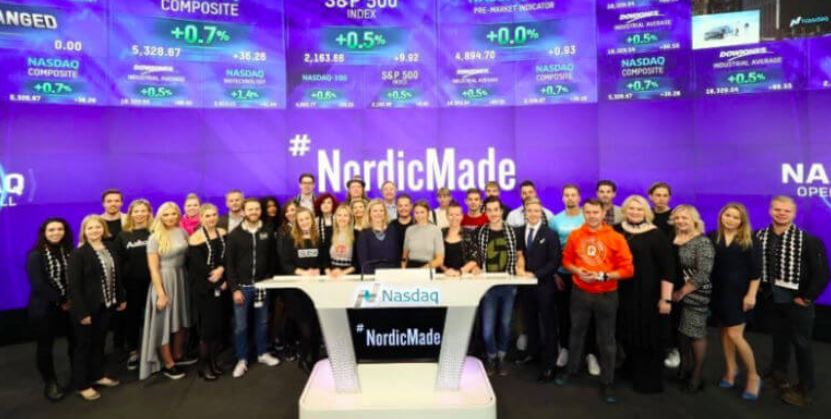 A delegation of Nordic startups rang the bell at the Nasdaq in New York on October 11th, as part of the #NordicMade showcase. #NordicMade is a community initiative that aims to build bridges between global tech regions and strengthen Nordic cooperation.  The bell-ringing also signaled the launch of a new €1.5 million Nordic fund.

Helga Valfells, CEO of NSA Ventures, took the NASDAQ stage to give a keynote speech about the Nordic countries’ role in entrepreneurship globally.  She was joined by Pia Elmegård representing Denmark’s #CPHFTW, a startup community organization.

“In the Nordic countries we work hard,  are extremely loyal to our companies and our cause, and we love technology. It is therefore no surprise that the Nordic countries have produced a string of successful tech companies. Over the past five years, the Nordic region, which contains only four percent of the European population, represents over 25 percent of all European exits,” said Helga Valfells, prior to announcing the launch of the new Nordic fund of €1.5 million.

The fund, which has been named Rising North, is aimed at supporting the internationalization of the Nordic startup ecosystem over the next three years. The projects supported by the fund should help boost the Nordic region into the global startup ecosystem.

The #NordicMade tour, organized by Finland’s Slush, sent 11 Nordic founders to New York City to help accelerate their businesses, strengthen cooperation between the Nordic hubs, and increase knowledge of the Nordic startup scene in the greater New York area.

The delegation included LeadFeeder, PromoRepublic, and Solu,  from Finland, Iris AI and DXTR Tactile from Norway, Corti and Zigna from Denmark, It’s My Styl and Optolexia from Sweden, and Watchbox and Sling from Iceland.

#nordicmade at SXSW: What makes the Nordics different?