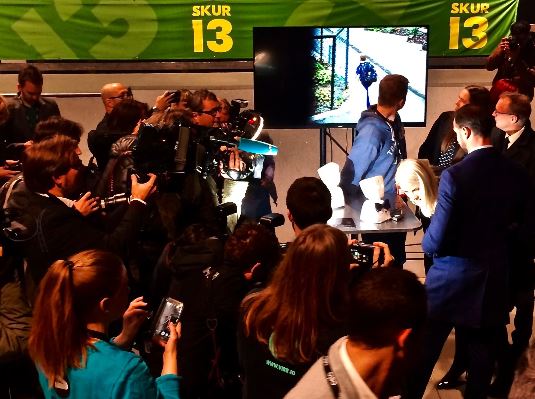 “Power Couples” was the theme for the recent Oslo Innovation Week (OIW) and quite fitting that Crown Prince Haakon and Crown Princess Mette-Marit of Norway (pictures above, interacting with the AV1 robot) attended the opening ceremony at Skur 13, the indoor skate hall alongside the regenerated harbour in Oslo.

Oslo Innovation Week is hosted by the City of Oslo and Innovation Norway with Oslo Business Region coordinating the five-day series of events held each October. The events range from seminars and talks, to workshops, meetings, visits to companies, a pitching contest and several hackathons. The events are held all over the city and hosted by over 90 different organizers, including accelerators, co-working spaces and corporate organizations.

It was a hectic week with more than seventy events focused on applying technology to areas such as Education, Medicine, Finance and the Creative Industries. Two hundred and fifty speakers supported the program and it is worth noting that over fifty percent of speakers and moderators were women. This reflects well the Norwegian sense of equality.

Oslo is the small and compact capital of Norway with the clean and relatively calm streets masking the energy and enthusiasm found within the many blossoming co-working and startup spaces. Only in the last four or five years has the city become more widely known as having a hot start-up scene, it is now claimed to be the fastest growing capital in Europe, with a high and increasing ratio of young, well-educated people. According to Startup Europe Partnership the Norway startup scene now has the momentum and potential to scale-up in a big way.

Locals are proud to point out the informal, low-hierarchy society of Oslo, where not only physical distances are short, but also from people to power and from words to action. There is a high level of collaboration, or “dugnad” as they call it. Trust is important in the society. That is not only important in a city where people networks quickly overlap – ‘everyone knows each other’ – but critical in delivering promises with international collaborators.

Other visible signs of action and progress are obvious to the visitor, the plentiful charging points for the growing number of electric cars, another indication of new direction required after the oil runs out.

The OIW 2016 theme of Power Couples meant the ‘building of bridges’ between large, established companies and the startup scene. Spanning across public and private organisations, academia, business and various industry sectors, the brave intention is to connect diverse bodies of knowledge, which should lead to radical innovation.

In addition to the networking, there were many demos with quite a few focused on Virtual reality (VR) solutions with various applications. There were also a few workshops including one to build your own drone – giving a few lucky visitors a unique hands-on experience!

At DnB Oslo headquarters, the DNB NXT 2016, a self proclaimed ‘conferencival’ for investors and entrepreneurs was well attended and very well organised. The day program of seminars and lectures covered venture and capital related topics as well as startup focused support.

The mid-afternoon session was provided by David Roberts – Vice President, Singularity University who gave a great keynote on ‘global trends and disruptive innovation’ highlighting the importance of understanding industries outside of your own, the onslaught of technology and the power of learning through connected devices (think siri, IBM Watson). He added a strong reminder to be courageous with a slide on the ‘regrets of the dying’ – insight from a palliative care nurse. Innovation and disruption comes from being courageous and challenging the norm.

The day culminated with the 100 Pitches Grand Finale, with the best 17 pitches from the original 100+ start-ups, taking centre stage in front of Nordic investors, VC’s and corporates. The entry rounds had taken place in the previous days and prior weeks with main topics of Greenovation, Social Innovation, Edtech and several Open rounds.

The winner was HomeControl a Smart House and Energy Management system to monitor and control home devices from one app and fitting that they received their winners prize money through a live real-time payment from DNB – witnessed by the audience.