The revenue of the member companies of the Finnish Startup Community, founded a year ago, has grown by 62 per cent from last year. The combined revenue of the companies was EUR 3.5 billion in 2021. The growth is expected to remain strong in 2022.

“The majority of the revenue of our member companies comes from exports, so the importance of startups to the Finnish economy is immense,” reminds Youssef Zad, the economist at FSC.

Net sales data are based in part on figures reported by member companies. The missing findings have been replaced by 2020 data, so the growth figures reported in the release are conservative. Some of the data has been estimated based on the responses to the forthcoming Startup Barometer. 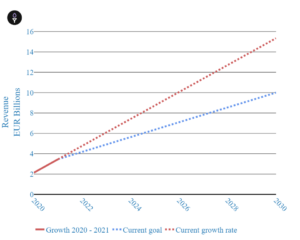 “The growth of companies in the startup community is dizzying right now. The 10 billion target we set for net sales and exports of Finnish startups by 2030 is fully achievable,” Youssef estimates. “I find it very realistic that the Finnish startup ecosystem will become at least as important a player as the Finnish forest and metal industries. In the longer term, it is likely that the ecosystem will become the most important cornerstone of Finland’s economic growth.”

The growth of companies in the startup community is generally really fast: over 60%. Since some of the companies have already scaled up with success, the overall growth is significant for the Finnish economy. Successful startup companies bring new capital to Finland, some of which is channeled into the new startups.

“The startup ecosystem is reaching a state where more mature startups are able to support the growth of younger companies by creating and attracting new skills to the Finnish labour market,” Zad estimates. “In addition, the stunning growth stories not only encourage entrepreneurship but also attract more investors who believe in Finland’s ability to create new growth.”

Inside Finnish Startup Community (FSC), the number of member companies has grown to 116 and there are dozens of membership applications in the queue. When the community was founded in 2020, there were one hundred members, among them Supercell, Metacore, RELEX, Yousician, Supermetrics, Wolt, Aiven, Smartly, Blok, Unity, Sulapac, YES.VC, Inventure, Maki Ventures and Lifeline Ventures.