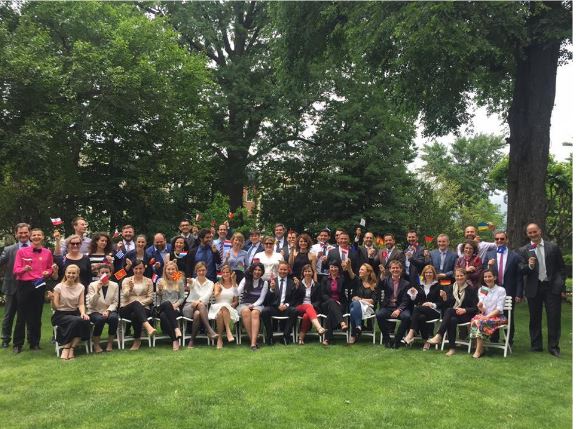 They selected 45 young professionals from 41 European countries, including some of the Nordics and Baltics. During the program, the fellows spent time in Washington and San Fransisco where they were invited to several institutions and startups, such as Google and Autodesk, and met with several changemakers and influencers, such as Vint Cerf, also known as the father of the internet, who is the vice president and Chief Internet Evangelist for Google, and John Karl, ABC News Chief White House Correspondent. The fellows spent two weeks at selected host organizations in eight cities around the US where they participated in day-to-day operations, job shadowed, and worked on their initiatives while getting to know local startup communities. The program concluded in Palo Alto where they fellows had the unique opportunity to attend the Global Entrepreneurship Summit and see now former president Barack Obama, Sundar Pichai, CEO of Google, and Mark Zuckerberg on stage delivering keynote speeches and participating in panels.

The Nordics and Baltics were represented by fellows from Estonia, Finland, Iceland, Latvia, Lithuania, and Norway. The fellows interviewed by Nordic Startup Bits agreed that participating in the YTILI program was an extremely expiring learing experience.

“YTILI inspired and taught me to solve big problems instead of small problems,” said Lars Kintel, Founder/CEO Kintel AS (NO).

Maarika Truu, Partnerships & Event Organizer at Garage 48 (EE), mentioned that her stay in Detroit for 2 weeks, as part of the internship at a host organization, broadened her horizon and think differenty about stereotypes portrayed in the media.

“Media still shows Detroit as a place one wouldn’t want to move to but is in fact a vibrant region with so much new, fresh energy, and bright ideas for the future,” Truu added.

Hannu Puras, Co-Founder of Fakefish Games (FI) discussed how he observed the people he met during his YTILI experience in a purely social retrospect – what made them good speakers, how they engaged him when having one-on-one conversations, and how they influenced him.

“This is what I’m working on at the moment. From my Finnish cultural background this level of engagement is not a given but a skill that needs a lot of work. This is the white whale that the YTILI trip triggered me to pursue,” Puras concluded.

“For me the most valuable thing in the YTILI program was getting to know the other participants from all over Europe. It was a very nice learning experience and even though we have such different backgrounds we still think alike and move towards the same goals,” Truu said about her YTILI experience.

Powercoders, a coding academy for refugees, is a great example of that. The idea was ignited by three YTILI fellows, Dita Prikrylova, founder of Czechitas, a coding academy for young women in the Czech Republic, Cornelia Mayer, founder of Topfreisen, a catering company where she cooks with refugees in Austria, and Christian Hirsig, a serial entrepreneur from Switzerland. The three initiators decided to take the leap of faith to start Powercoders during the GES after meeting with all these inpsiring entrepreneurs and seeing so many impactful projects. Hirsig then took the idea to the next level and together with a local team launched a Powercoders pilot in Bern in January, 2017 after a successful crowdfunding campaign.

In 2017, the YTILI Fellowship will engage up to 100 young European entrepreneurs in a series of professional development and leadership activities that are designed to support the growth and development of commercial and social business ventures in their home communities. YTILI Fellows will build networks, linkages and lasting partnerships to attract investments and support for their entrepreneurial ventures. YTILI provides a unique opportunity for young entrepreneurs to gain professional experience, skills, and connections valuable to enhancing their business or social venture while connecting with a dynamic group of experts and mentors in the United States and Europe. By participating in YTILI, the fellows will have acces to a growing network of dynamic European entrepreneurs committed to enhancing the transatlantic relationship and contributing to the growth of entrepreneurial ecosystems in their home communities.

The YTILI program is currently open for applications unti February 6th at 17:00 EST. YTILI is looking for young (24-35 years of age), diverse, creative, and enthusiastic entrepreneurs with a focus on startups that are socially engaged or ready-to-scale. Applicants must be citizens or residents of the Nordics, Baltics, or other European countries (see list here) and be eligible to receive a US J-1 visa.

For more information about the criteria and the application process,visit the YTILI website.

Image: The 2016 YTILI Fellows at GES at Stanford University

Is Austin a viable landing pad for Nordic startups in the USA?