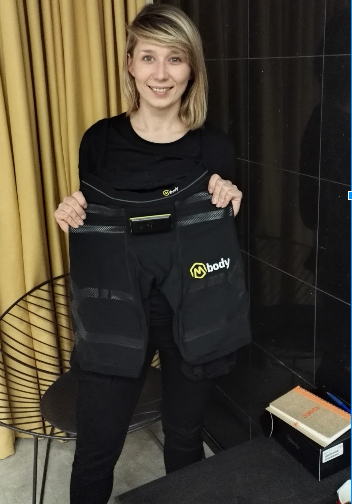 The process of Electromyography (EMG) has for decades, conducted in labs on subjects who are rigged up to wires that lead to a processing machine monitored by technician.  Myontec has created a wearable solution that is capable of performing the same processes.

EMG is a diagnostic technique that monitors measures muscle activity and is used to analyze human kinetics and neuromuscular diseases, as well as motor neuron diseases such as West Nile Virus.  This is done by interpreting the electrical signals emitted by contracting muscles and turning this information into quantifiable data.

Myontec’s wearable solution, called MBody, focuses on the kinetic analysis side of EMG, and is capable of monitoring muscle activity through clothing that detects the wearers movements.  “Mobility” is a key word in many med-tech innovations, and by coupling this concept with smart clothing, MBody has taken the lab outside the lab.

MBody’s first industrially produced product is a pair of shorts, but they are keen to point out that they can tailor make any other garment to focus on other muscle groups.  The shorts have sensors strategically placed to accurately read muscle movements.  Attached at the back of the shorts in an unobtrusive position is the “brain” of the “lab”, which processes the movements into data that can be transferred via Bluetooth Smart to any device.

When the app is in use, users can get real-time reading on their neuromuscular performance, and can, for example, make adjustments to reduce the risk of strains or injuries.  The shorts are even washable.

A long road from the lab to your clothes

Myontec is a spinoff company of the Kuopio-based Mega Electronics, who up until Myontecs’ inception had been refining the EMG  process. When the idea came up for wearable technology capable of doing the same job, Myontec was born with the sole purpose of investigating this new technology in 2008.

Though quite a lot of time has passed since the company’s inception, most of that time was devoted to development of the product and the business idea in general. As with any health tech disruption, there was initial skepticism that it was an effective and reliable substitute for a decades-old process.

Alongside the peer scrutiny there has been validation in the completion of a number of Phd’s about the wearable technology conducted at the University of Jyväskylä. As the final proverbial “proof of the pudding”, Myontec and their Mbody product won the Wearable Technologies World Cup “Sports and Fitness” category in 2014.

Though Mbody is now mostly used in the sporting sector, it has far reaching potential in a number of other areas like physiotherapy and rehabilitation, the military, and even for astronauts.