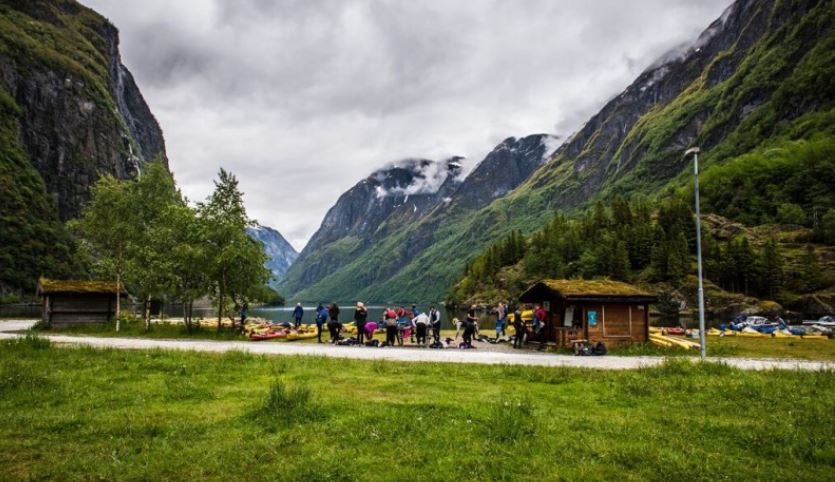 Norway has only recent emerged as a startup hub, with it now leading the Nordics as the fastest grower in number of investments. However the Norwegian scene is often not acknowledged beyond Opera, and we think it’s time that changed.

Love them or hate them, the right robot can save us time and money. And the folks at nLink have been building one of those right robots for the construction industry. It’s not the sexiest field to be in, but nLink think that they “make boring exciting.”

The Mobile Drilling Robot is patent-pending, and is said to allow manual labour to perform 5-10 times faster, saving an estimated two days per 1,000 square meters. We’re not all out of a job though, as a human still operates the robot via an iPad application.

The company was founded in 2009 by Konrad Fagertun, Halvor Gregusson, Håvard Halvorsen, Jørn Sandvik Nilsson and Jørgen Borgesen. They have offices in Oslo and Songdal, and were named the Nordic Startup Awards’ Best Exponential Startup at this year’s Startup Extreme.

2. No Isolation: Tackling loneliness of children with long term illnesses

From one robot to another, No Isolation‘s AV1 is an avatar robot that is built to tackle loneliness in children suffering from long term illnesses. The avatar is a computer kitted out with a camera, microphone, speaker and motors, and can be taken both into the classroom or the outdoors. The child on the other end receives a video stream on their device, allowing them to join in with activities and lessons in ways not previously possible.

No Isolation took home awards for Best Social Tech Startup and Best Newcomer at this year’s Nordic Startup Awards. The company was founded in 2015 by Karen Dolva and Marius Aabel, and this July raised just under $300,000 in funding from PR agency Trigger.

Social storytelling platform Socius harnesses user-generated content to help brands tell their story. Their “hubs” of content can be hosted on a website homepage, or pop up as a campaign microsite, and the content is curated based on preset rules and filters or manual additions.

The company claims that their native ads and calls-to-action achieve a ten times higher click-through-rate and 30% more ad impressions. CEO Daniel Butler explained to Wired that “tools are needed to index the social web,” and that Socius, “could be a potential replacement for a website.”

This August Socius raised $400,000 from 500 Startups‘ Nordic Fund and Raa Invest. They already boast clients such as Condé Nast and Visit Norway.

Founded in 2013 by Frode Jensen, Daniel Butler, and Marius Troy, they are based in Oslo.

Sitting in a very hot space, Futurehome offer a variety of tools and services so that your home can be smart. All your smart devices (lights, alarms, heating, locks…) can be controlled from the Futurehome app, on Android and iOS, and work together based on your preferences.

The Futurehome Smart Hub is installed in your home to act as the central system through which all devices are connected, communicating via the open standards Z-Wave and EnOcean, and new devices can be easily added via the app. Currently the system is only available in Norway, but they are looking to expand into international markets.

Founded in 2013 by Erik Stokkeland, Odd Eivind Evensen, Bjarne Handeland, and Sigbjørn Groven, the company initially raised funds through an Indiegogo campaign, which was followed up by a seed investment of €1.25 million led by IKM Invest.

Xeneta – Changing Shipping & Global Logistics from Xeneta AS on Vimeo.

This year’s Nordic Startup Awards’ Startup of the Year, Xeneta is a platform that aims to help shippers, fowarders and shipping lines operate more intelligently. The data collected, sampled and aggregated by Xeneta enables its users to analyze and evaluate their rates in comparison with the volatile market, and industry experts are on hand to provide further advice.

The Xeneta product suite currently consists of Xeneta Intelligence, for insight into your own freight rate performance; Xeneta Analytics, for helping to identify “untapped potential in your ocean freight spend”; and Xeneta Advisor, for personalized strategic and tactical insights.

Xeneta was founded in 2012 by Patrik Berglund, Thomas Sorbo, and Vilhelm K. Vardoy. In 2015 they raised $5.3 million in Series A funding from prior investors Creandum, Point Nine Capital, and Alden, as well as new investors Alliance Venture.

You just completed the best Ollie of your skiing career, and no one was there to capture it. That’s the problem Staaker aims to solve with its auto-follow drone, built with AI to predict your movements and capture the best footage, or the ultimate selfie.

The Staaker device is compact, robust and quick to set up, tracking you from the air based on a wearable armband. With five different flight modes, it has a max speed of 80 km/h, and a flight time of 30 minutes.

Staaker was founded in 2013 by Ole Jørgen Seeland and Sigurd Gran-Jansen. You can pre-order the Staaker now for $1195, with an estimated shipping date of December.

This wouldn’t be a complete list without a sharing economy startup. Nabobil is Norway’s answer to Getaround, a car sharing platform that lets users rent each other’s cars. Cars can be rented by the hour or day, and users access the platform through the website or iOS and Android apps.

Nabobil are in good hands with their CTO Christian Hager, who won CTO Hero of the Year at the 2016 Nordic Startup Awards, although his time is also split as the CTO of two other companies and CEO at one more.

Based in Oslo, Nabobil was founded in 2015 by Jacob Tveraabak and Karl Munthe-Kaas. They then brought on CMO Chris Moen, Theodor Tonum, Jenny Sjögren and Thomas Grondahl as part of the founding team. Since then, they hired former head of Airbnb for the Nordics and the Netherlands to take the role of CEO. The company raised $600,000 in seed funding earlier this year from a group of angel investors, which will be used to help them expand into another country outside of their native Norway.

Kahoot! is a game-based platform making waves in the educational technology sector. The simple set-up lets anyone (read: educators) create a game (read: test) that ensures players (you get the picture…) are really learning and engaged with the content at hand.

Each game is built from a series of multiple choice questions, with added media such as images or video. A shared screen displays the game, and players interact with it on their own devices. Whilst Kahoots are, “best played in a shared setting”, they can be accessed from anywhere via Kahoot.it.

The company was founded in 2011 by Morten Versvik, Johan Brand, and Jamie Brooker, with the product launching in 2013. Last month they raised $10 million in Series A funding, led by Creandum. They report an expected MAU of 33 million this month.

This article was originally posted on Geektime.

A mobile solution from Norway to help build the future