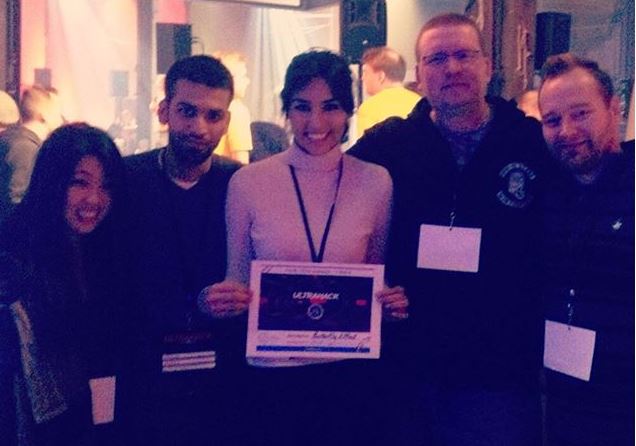 The grand prize at Ultrahack 2015 went to the Butterfly Effect Project, who participated in the Civic Tech Track sponsored by Forum Virium.

The project aims to enhance the way cities handle urban planning, by creating a platform for citizen involvement.

The name of the project comes from Chaos Theory, and is a reference to the fact that small changes can have an outsized effect on a whole situation.  For the Butterfly Effect Project, that means that small changes in the way citizens interact with their urban environment can change the way cities are planned as a whole, and thus the greater urban environment in its entirety.

“On the one hand, we have the outdated ways our cities interact with citizens,” explains Natalia.  “Civic engagement needs to better leveraged.”

The solution her team has come up with is a platform and an app that can be used by city dwellers everywhere to suggest changes to the urban fabric of their cities.   Citizens can take a picture of an area in their city that they think needs improvement, repair, or “something different”, hashtag the photo with their plan and the city, and upload it.

The platform allows for users to see who is using the same hashtag, so that anyone can vote for projects.

Architects, urban planners, political leaders, and decision makers in a city can they see what needs to be improved in the city and what changes residents would like to see.

As Natalia says, “This also empowers users to participate in a democratic way.  With this open data, we can also have a city-wide architecture competition.  Anyone can propose a plan, and users have an opportunity to fill the space.  It’s a bottom-up approach.”

Besides creating a platform where citizens can be part of a working group to improve their surrounds, the Butterfly Effect also provides valuable data for the city, such as which areas are most used and how.

A slow-burning idea brought to life in a weekend

Natalia has been thinking about creating the Butterfly Effect for about year, but the project was not fully iterated until Ultrahack, where the majority of the development was completed over one long weekend of hacking.

Some of the development done at Ultrahack also included side-projects, such as building a feature that used open data so people could see where parking spaces are available in their cities.

“There was a lot of scraping through Instagram data and putting it on a map,” says Sara Yang.

Sara was one of the members of the team who joined at Ultrahack.

“It was total serendipity, we just happened to be in the same hotel room!  They were tackling something that had the possibilities to go far beyond this event, and they happened to need a business side, so I came onboard on that end.”

The team is currently seeking €250,000 and strategic advisers to run a pilot.

The team was able to get feedback from an investor standpoint at Ultrahack, and now has the chance to meet investors at Slush.

“It’s so cool that single weekend can catalyze something and bring it to life,” says Sara.