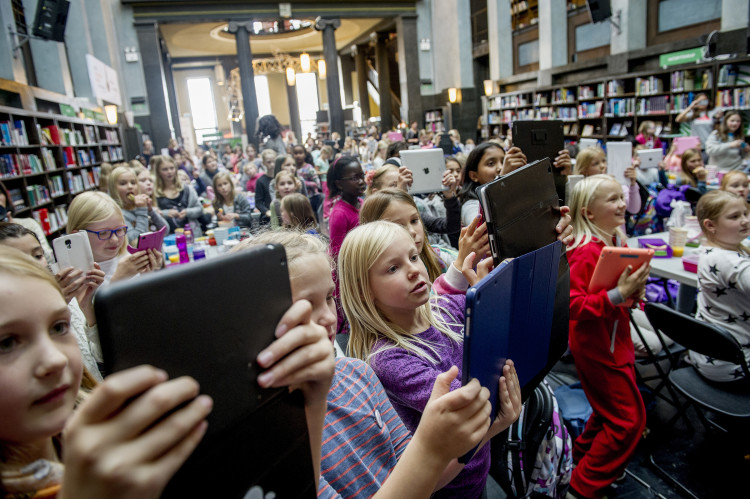 “Ed-tech is boiling over here in Sweden”, says Jannie Jeppesen, founder of Ed-tech Sweden. But the community remains a black hole for Swedes – and even ed-tech companies themselves.  Ed-tech Sweden is now launching the first ever mapping of the ed-tech ecosystem in partnership with Silicon Vikings, to build transparency from the ground up, and get ed-tech on the agenda.

Jannie first stepped into ed-tech from the education side, when she implemented digital learning tools as a principal in a Swedish primary school.  She is now wants to use digital tools to take education even further.

The potential of ed-tech to positively impact education in society is huge.  Ed-tech technologies can for example, be more individualized, democratize access to knowledge, maximize learning retention and, help address the growing skills gap for better digital competences in the workforce.

As Jannie explains, “Ed-tech doesn’t change the principles of learning, but it provides new ways to collaborate and communicate.”

Ed-tech at a grassroots level

Ed-tech has been used in primary education in Sweden at a grassroots level for many years, with teachers and administrators taking personal initiatives such as using educational games in their classrooms. The success of MinecraftEdu is one prominent example.  However, the use of digital tools in adult education has been lagged behind.  Ed-tech Sweden, founded in 2015, aims to tackle this issue head on and bring digitalization to tertiary and adult education.

“Ed-tech Sweden is an initiative that we started in January 2015 with partners from different sectors on the business and public side, and publishers in higher education.  We found there are a lack of initiatives when it comes to digitalization in higher education and adult education,” says Jannie.

“What are the hindrances to making this happen?  We want to direct this initiative at decision makers, because we want the question on the agenda.”

Ed-tech Sweden aims to put digitalization at the front and center of educational reforms.

Integrating ed-tech can form a crucial link in training students for the next generation of jobs.  Simply having the option to take IT training is not enough.

“As in the rest of the world, there is a demand for continuous learning within different sectors, and this is vital for digital transformation.  You cannot just put tech into a business or healthcare.  Change happens when competences are embraces,” says Jannie.

A technology skills gap in Sweden is putting pressure on schools to better prepare students for the workforce. As Jannie explains:

“The tertiary educational system is falling behind in Sweden, and this will affect the competences that we need.  There will be a gap between what society’s needs are and what competencies we actually produce.”

The other Nordic countries have been tackling this issue as well.

In Norway, an education reform known as the Knowledge Promotion, started in 2006, added digital literacy as a core part of the national school curriculum, and made it a mandatory subject at every level of compulsory schooling.

And in Finland, local education authorities are busy working on an updated core curricula to be implemented in August 2016, which will include increased training in digital competences.

However, Sweden’s record in digitalization has been spotty. Former education minister Jan Björklund opposed a national IT strategy for schools, and once ruled against the use of tablets in classrooms.  And while the tides have been changing in the government, traditionalism prevails in higher education.

It is also difficult in Sweden to access continuing education programs once you are out of the university system.  Universities have inflexible hours, which means that if you are employed full-time, you cannot take courses.

“They are closed to professional development”, says Jannie, which is a problem, since “80-90% of formal learning takes place under the direction of an employer.”

Ed-Tech in Sweden is a fragmented community. The term “ed-tech” is not widely spread, and ed-tech companies, sometimes don’t define themselves as part of this segement, partly due to lack of knowledge about what constitutes ed-tech.  But the definition is actually quite simple:

“I would define it as a technology that has one market: schools.  It is not a “learning” technology.  Some ed-tech is directed at learning, but a lot of it is directed at administration.  Everything in this sector is ed-tech.  It is like the definition of art:  everything art makers approve of is art.  Everything the educational market approves of is ed-tech,” says Jannie.

The next step is to make sure that the companies working on these solutions can come together, with schools, and help each other.

“Ed-tech is not established here, it is kind of unknown even to ed-tech startups.  They don’t call themselves ed-tech because they don’t know that that is the name for what they are doing.”

Jannie believes that a big hero story will help ed-tech get the attention it deserves, and by extension the funding to reach market growth.

“Ed-tech doesn’t have an identity in Sweden.  One of the reasons for this is we haven’t had an ed-tech unicorn.  You need to work on a global market to begin with, even if you are using Sweden as a test market. ”

Mapping ed-tech for a better future

The first way to help ed-tech grow in Sweden is to build transparency, and help boost knowledge-sharing across the sector.  Ed-tech Sweden has launched the first ever mapping of the Swedish ed-tech ecosystem to accomplish this.

“We have a lot of established companies, and a lot of startups, but we don’t know anything about them. Who are they, where are they, how large are they, how influential are they?  We don’t know.  The idea is to map the market and find out.  We want to reach out to them so we can lift the sector up and find a meeting place for the sector.”

Jannie sees ed-tech as much more than an opportunity for business growth.  While the startup ecosystem is often focused on getting the biggest valuations and investments, ed-tech is strongly tied to social innovation.

“Ed-tech can also really have social benefits.  We know education is the key to ending poverty, gender discrimination, and so on, so you should definitely put investment towards it. It will give back 10 times,” says Jannie.

Read more about Ed-Tech Sweden here and participate in the mapping here.

Adaptive and interactive learning takes more than hardware to succeed