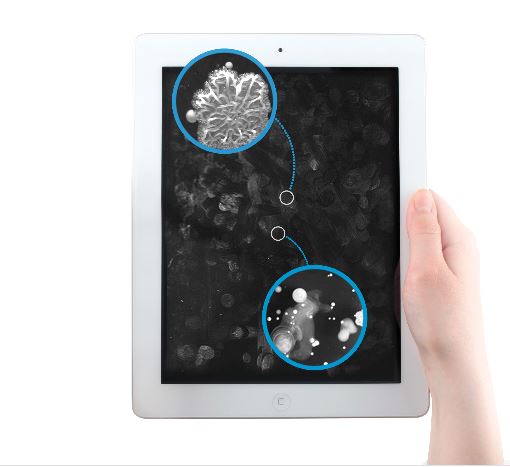 With flu season hitting in full force, everyone is trying to find ways to stay healthy and sane. Short of sealing yourself off in a bubble, there are some easy steps to reduce your risk of getting sick. While washing your hands and other common sense measures are useful, there’s one place that few think about in fighting germs.

“Phones and touch screens on tablets are dirtier than a public toilet,” says co-founder and CEO Dmitry Genin.

Genin and his team have developed a spray for cleaning sensitive touch screens that they say successfully kills bacteria, helping to stem the spread of disease. So far, the company has tested out their product on strains like E. coli, MRSA, and Salmonella. While they have not had the opportunity, Genin says that in theory, their spray should even be against Ebola. Hopefully they won’t have to test this one out in person.

“The formula attacks bacteria microbes that are encapsulated,” he explained to Geektime, breaking through their barriers to kill them. “While these diseases are deadly, they’re easy to kill outside.”

Founded in the summer of 2012, they went to market at the end of 2013 with a wet wipe aimed at testing customer interest. Based in Espoo, Finland, they belong to the first generation of the healthtech accelerator Vertical.

No products for truly cleaning devices

Since alcohol and other cleaners destroy the special coating on smartphone and tablet screens, the team understood that there was no product on the market at that time for cleaning these devices’ surfaces.

It had to be up to professional grade for cleaning says Genin, but without elements that would harm the screens. This forced the team to look for natural solutions.

Genin explains that the government research office VTT, the Technical Research Centre of Finland, had been studying arctic berries to find the most potent type for their antibacterial qualities, concluding that berries are natural agents for fighting bacteria.

Eventually, according to Genin, they declared that the arctic cloudberry had shown the best results, leading Nordic Hug to base their product on its extracts. They currently have multiple patents pending on their products.

Approved for airplanes, and children

Their primary markets as a B2B startup (business-to-business) are targeted at education, aerospace, offices, and healthcare — basically places that have a large number of use needs. They have been certified by Boeing and Airbus and have received certificates from SMI Inc, passing on their first try when Genin says that it normally takes three to four years for approval. In order for a product to be accepted for use on aircraft, it must be deemed safe for use on all surfaces, from windows to the cockpit instruments.

The company sees education as an ideal market for their product due in part to the popularity of using tablets in the classroom. As these devices are passed around between children, they collect any germs that the kids have on them.

“Bacteria likes laptops and mobile devices since they stay warm and are passed around,” Genin explains, adding that schools are not used to this and now need to learn to clean them. Nordic Hug has begun working in schools through their partnership with the Samsung Smart Classroom program in Finland. As part of the project, the distributor goes into the classroom or other place that the product is being used to explain to the teachers how and why to use the product.

Next, approval for use in hospitals
Looking to the future, Genin says that they are hoping to introduce their products into hospitals since they could have a significant impact on reducing the transmission of harmful bacteria there. So far, the road to approval has been rocky, with Genin explaining that the process for the hospitals, especially for a young company, can take an extended period of time. He notes that even General Electric can take three years on average to bring a new device into this slow adapting field.

This article was originally published on Geektime.