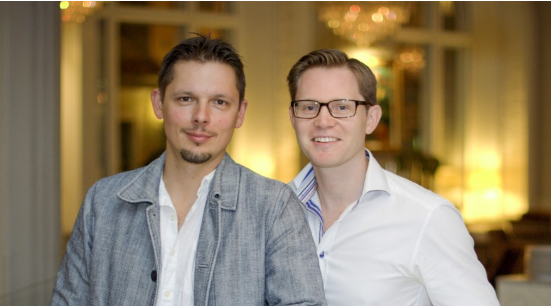 Mistbase is an upcoming IoT start-up that provides the technology that makes IoT possible, and is ready to take on the telecom giants.

The company, based out of the Ideon Innovation Incubator in Lund, Sweden, was founded in mid-summer 2015 by long-time friends and colleagues Michal Stala and Magnus Midholt, who have a combined experience of over 20 years working in telecommunication.

Both experts and innovators in the field, the two also hold a combined 19 patents.

From research to entrepreneurship

Michal, who is also a Ph.D. student at the Faculty of Engineering in Electrical and Information Technology at Lund University, also conducts research on the future of wireless communications.  Mistbase is a spin-off of this research.  Michal explains:

“My research area is in digital hardware design and telecommunication, and the work I did at university  was a simulator for LTE, and then I started to do the actual hardware, which laid the foundation of Mistbase. Magnus is more in the software domain, so he began to do the software, and that’s Mistbase started.”

But what exactly is LTE?

LTE, which stands for Long Term Evolution is the latest development cellular technology. Currently, technology is developed along 2 different tracks, with differing specifications.  One track is a “high end” track, which goes towards things like smartphones.  The other track is for IoT devices:  low power, low cost.

“For IoT devices, it is about being extremely low power.  Many of the use cases that this technology is aimed for require very long battery lifetime.   So if you are a farmer and want to put out a sensor in a field to track humidity in the soil to measure how much water you should use, you don’t want to change the battery that often.  And there are thousands of use cases like that.”

The unstoppable growth of IoT

An estimated 30 billion connected devices will be deployed in the future, of which cellular IoT  and similar modules are forecast to account for 7 billion units by 2025 [Machina Research, May 2015].

“The IoT market is divided into sub-categories, and the majority of them will work with the technologies like WiFi and Bluetooth technology – like the technology in your home.  But some of the use cases require mobility and increased coverage, like tracking devices on containers.  And that is where we are, which is a large part of the IoT market,” says Magnus.

Mistbase provides a service that differs from the mobile technologies most people are familiar with, in that it is longer range, and more “mobile” – meaning it is not locked into a certain area.  Rather, the technology can be used anywhere in the world where there is cellular coverage.

Of course, making a device cheap, long-lasting, and expansive is a difficult balance.

“It’s always a trade off – if you increase the range then you might lose some power and so on,” explains Michal. “We try to balance these parameters and compromise between the 2.  Some of the foundations of cellular technology are standardized, but we try to implement these standards in the most optimal way.”

“The benefit of our company is that we can optimize from the very beginning.  Other companies have to take existing infrastructure and try to optimize it and mold it, but we have a clean slate and can start from scratch.”

Mistbase’s hardware design is based on an automated design process called High-Level Synthesis (HLS), which allows hardware designers to efficiently build and verify hardware faster in comparison to traditional circuit design techniques.  In short, you have a faster design time, which saves money.

Although the technique has been used since the mid-aughts, it is still not always implemented in the more traditional semiconductor companies.  And while big companies Intel and Qualcomm are using the technology, they are unable to implement it to the same extent as a smaller startup like Mistbase, who use HLS for all their hardware.

“Many companies do this, but not to the same extent, because we do this for all our hardware,” says Michal.

This is the crux of Mistbase’s strength: being able to quickly and cheaply adapt technology to different standards, protocols, and devices.

Given the future of IoT, Mistbase’s agility makes them well-positioned to take on larger mobile corporations.  The team is hoping to bring their product to market within 2 years.

The first demo of the product will occur on February 22nd of 2016 at the Mobile World Congress in Barcelona.

How to talk to your Mom about AI

Why mobile optimization is everything