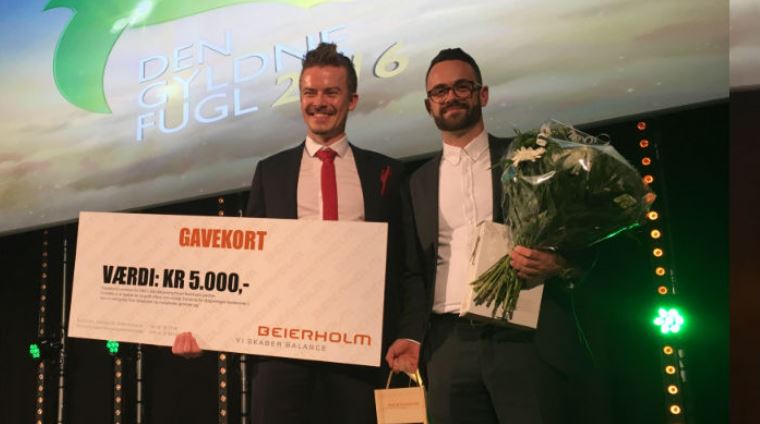 This weekend, the Danish entrepreneur prize “Den Gyldne Fugl”, or the Golden Bird, was  awarded at Aarhus University. The winner was RaskRask, a platform for on-demand health-oriented massage, who previously offered on-demand physiotherapy.

The market is always right. That was the reason for the shift in focus that Raskrask.dk performed this year. They pivoted from an on-demand physiotherapy platform to on-demand, in-home health massage. Their mission remains the same: to make health and wellness accessible to all.  Last weekend, the startup won the Årets Iværksætter – Entrepreneur of the Year award, from the early  Golden Bird competition in Aarhus.

The Golden Bird is the Aarhus University of Business and Social Science’s annual award show, where students, teachers, and startups are hailed.

Bumps on the road lead to success

Before becoming a success, the company struggled with the legal challenges of connecting physiotherapists to users, which halted their initial project.

“We refused to give up. We had to find another way to help those who are too busy or ill to come to a clinic”, says co-founder Albert Kirk.

“We started listening to the market and talking to the customers. It dawned on us that over 70% of customers sought health-oriented massages rather than physiotherapy. At the same time, we found that there are lots of massage therapists who would like to avoid administration tasks so they can focus on the human touch, so it was just the natural way to go. “

Raskrask is now a platform where users can book health-oriented massage therapists to come right to their living rooms.  The idea for RaskRask came to Albert Kirk when he was injured playing football with his friends.  He had to spend so much time waiting in both the doctor’s office and in the physiotherapists office, that he ended up not going because work and family would get in the way.  He realized that having help come directly to his living room could be an amazing treatment solution.

“We have had over 500 treatments through the platform. All with phenomenal feedback. We spend a lot of time listening to our customers to continuously improve the user experience,” says Albert Kirk.

The concept of RaskRask is flexible, and he plans to scale the platform from Aarhus to the rest of Denmark, and move from massage to occupational therapy, psychology, and nursing.

“The concept is built to scale from the start and only makes economic sense when we reach out to the rest of the country. As much as possible, everything is based on technology and automation that clinics can not compete with. By focusing on creating a unique user experience to get fast help at home, great design, and dedicated customer support at a good price, we can potentially make an ‘Uber’ in the market where we can do it better and cheaper than existing players, ” he says.