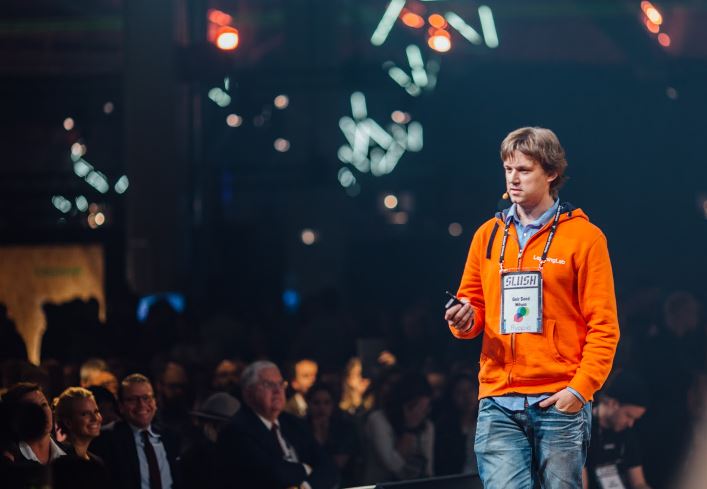 The Slush pitching competition: one of the highest stakes startup competitions in the world. Three minutes to explain who you are, what you do, how you will make money and how you will grow your business.

In addition you must stick out from the crowd and seduce a panel of spoiled venture capitalists.  No matter how experienced you are, the pitching competition is a huge challenge. For me as a stutterer – it’s the ultimate challenge.

Ok, my stutter is not that bad. Most of the time I can talk to people without stress. But there are some factors that seem to trigger stuttering more than others. Among them are time pressure, talking about something that means a lot to me, having to stick to a given script and talking English (not my first language). I guess you can understand why pitching my very own startup in three minutes with lots on stake is a challenge. I am likely to stutter no matter what.

Tried fixing stuttering on national TV with a mental coach

About two weeks ago, my startup, Edtech Foundry, was selected as one out of 100 startups to the pitching competition at Slush. Of course a great honor when it’s 1.700 attending startups, but I knew it would require quite a lot of job to get my pitch right. Not just the content, but my speech. It had to be worked on to neutralize the stutter-triggering factors.

The pitching challenge is not new to me. I have even been coached by the best selling author and mental coach Erik Bertrand Larssen on Norwegian TV to try fix this exact problem. In the TV-program, my exam was to pitch my business to a panel of investors. Sadly, I didn’t perform as good as expected. This time I got a new chance to prove I can fix it. The pitching stage at Slush turned out to be my real exam.

No details – no details

Only three static slides were allowed in the pitch and they had to be sent to Slush about a week prior to the event. I wanted to keep as much flexibility as possible and decided to send three slides with a minimum of text. Just one basic slide for the problem, one for the solution and one slide showing traction. The details of the story was to be fixed later. The slides were anyway enough to support whatever story I decided to go for. A pitch should always start with the problem and the solution before moving onto the rest anyway. My general slides fixed that. I still had a week to nail what to say.

I usually try to attend the parties when going to startup conferences. In my mind, that’s where the best networking happen and you create the best relations. People prefer doing business with people they like. The opening party at Slush was one of these places. But my pitch was the very next day, and I still had not found time to practise it. I had a main structure, but it was for sure not ready for presenting. So I decided to head home early even before the official opening party started. Shit – it’s hard to be a startup.

The very minute I got back to my airbnb apartment, an investor texted me and asked if I was going to the opening party. Damn! I had to go. I just knew it. When investors invite a startup over for a drink, it’s really hard to say no. This investor was also a super cool guy and later a great friend. I had to join in for some hours.

Mirror, mirror on the wall

At 1AM I was finally home and immediately jumped into the preparations. First step is always to put on the timer and just try something, repeat some times and see where I’m at. For a 3 minute pitch, I needed a 2m30s pitch and 30s in backup to get the right feeling. This time I was surely not at the right place. I clocked in between 5 and 6 minutes. Could it be the drinks that made me fuck things up?

It was about time to start tweaking every word and finding the short, but well formulated sentences that told my story well. I wrote down the entire pitch then removed everything that was not super important. This is the hard part. Finding what can be left out. An hour later I was on to something and tried reading the whole thing out loud. Ok, just over 3 min. Cool. Now we are on the right track.

Visualizing what is about to happen

But clocking in at 3 min when reading is something completely different than nailing the entire pitch in 3 min. I moved over to the mirror and repeated the pitch over and over. So many times it felt like you I could say the pitch when dreaming. I needed that feeling of control. An hour later, I was super bored of the pitch. A good sign. Then I can get some rest. When I have been super focused just before going to bed, my subconscious would most likely continue working on it.

The pitch was at 1pm the next day. Before that I had some meetings, but I tried using every possible time in between to visualise my pitch. I even went to the pitching area and tried standing as close to the stage as possible when another startup was pitching. Just to get used to everything. When I’m on stage, I must feel like I have already been there. Trigger the positive feelings rather than shortage of time, lack of control and anything else that trigger stuttering.

The last thing I visualized before falling asleep was me rocking the stage and feeling like I’m top of the world.