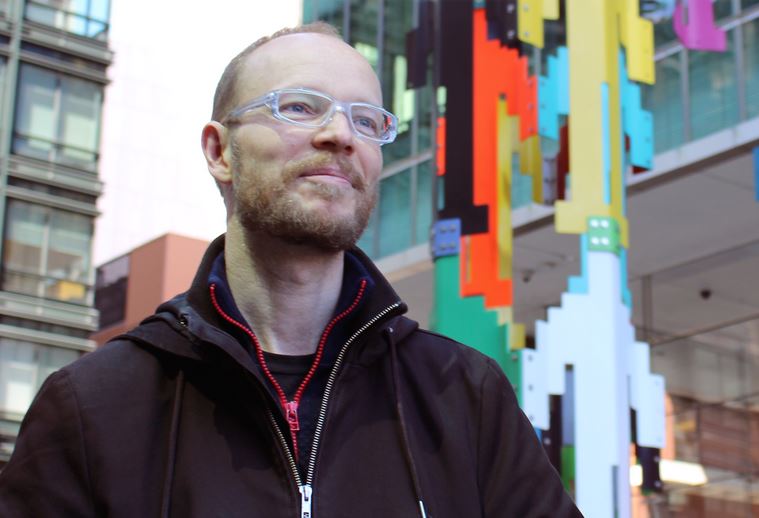 The story of Tradeshift has become somewhat legendary in Nordic entrepreneurial circles. The company was “founded on Twitter”, after one of Tradeshift’s founders Christian Lanng responded to a tweet by serial entrepreneur Morten Lund asking about interesting work being done to make government more efficient.

Lang tweeted back about some of the projects he was doing with his colleagues Mikkel Hippe Brun and Gert Sylvest for Danish government. Excited about the projects, Lund invited him on an impromptu trip to an innovation conference in Dubai. On the flight over, Lund told Lanng he had been able to secure him a speaking slot, and Lanng spent the rest of the flight furiously creating a presentation.

But co-founder Gert Sylvest is drolly pragmatic about his entry into entrepreneurship.

As a consultant for Accenture, he often spearheaded projects aimed at helping businesses – and helping the government to improve their efficiency, he explains. Often, “these projects exposed huge gaps in the market – and had the potential to become businesses themselves.” For Gert, it was an obvious choice to turn one of these projects into a business.

Thus is the story of Tradeshift, which helps companies collaborate digitally, rather than through paper, phonecalls, and emails. Alongside his 2 co-founders, Gert has helped grow Tradeshift into a massive global success, connecting over 500,000 companies in 190 countries, and raising an investment of 400 million Danish kroner, one of the biggest investments in Denmark of all time.

The “LinkedIn for supply chains”

The company aptly describes themselves as “a supply chain model that takes after Linkedin”, and they are quickly following LinkedIn’s success, albeit in the B2B world.

Tradeshift’s service answers a simple question.  2 billion people are currently connected through social media networks – but why not companies?  Simply put, businesses today are not as connected with each other as people are in their private lives.  Tradeshift’s platform solves this connectivity problem.

“We believe that in 5-10 years, nobody will accept a business offer that is not connected,” says Gert.

The platform works at a transaction level, by digitizing basic business processes such as invoices, orders, and payments, and providing a software for companies in the cloud, so that any company anywhere can join for free and start collaborating digitally.

But why is it so important for businesses to be connected?

Gert explains that increasing connectivity solves a problem any modern business faces:  the speed of change.

“Today, companies can no longer just optimize for cost, because supply and demand patterns have accelerated so rapidly,” explains Gert.  Businesses must be able to change fast – and ot do that, they need access to real-time information.

Although the company was founded out of Copenhagen, their global headquarters is in San Francisco. For many foreign companies, the intense competition in Silicon Valley coupled with a lack of network in the area can be a death knell, but Gert says that being Danish actually helped the company stand out and succeed.

“Danes have an informal, non-hierarchical working culture.  And we tell things to each other very straight,” says Gert. This company culture helped them attract top talent, a vital ingredient for success.

Tradeshift is currently in the process of building services into China, and Gert feels that the company’s Danish roots help prepare him for the challenge.

“As in Denmark, there is a lot happening in China right now,” he says.  “That entrepreneurial spirit that we are seeing everywhere in Denmark, you see the same in China.  There is a new generation of people who are excited about new technologies, which makes it easy to find people who fit the company culture.”

Why gamification is going global