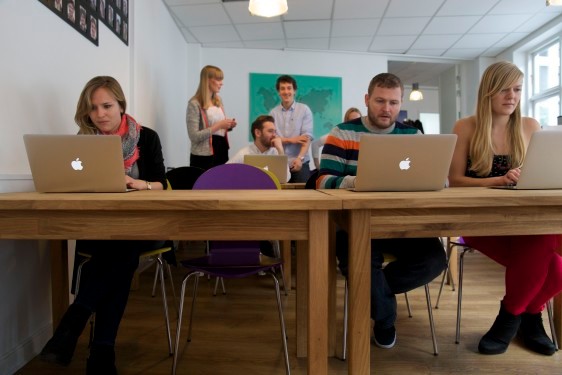 Wrap Up of the Nordic Startup Conference

Falcon Social is a social media management platform based out of Copenhagen. Under the leadership of CEO Ulrik Bo Larsen, the company has grown from 4 to 130 employees in about 15 months, acquired an impressive roster of international customers,  as well as raised $9.33 million in seed and Series A venture capital. We sat down with him to hear more about this impressive growth.

Walking through the offices of Falcon Social is like walking through a maze. It covers two levels of a building on Købmagergade and are expanding into yet another floor this coming month. It kind of looks like they just moved in, but the truth is that the structure of the organization has been evolving and expanding so frequently that they haven’t had the chance to properly settle.

The inception of Falcon Social’s social media management platform occurred while Larsen was working at a boutique digital media agency. As a side project, him and two other colleagues worked on creating a platform suite that could integrate all the different social medias and better monitor all the different accounts at once.

“We were bootstrapping, but I guess you could call it comfortable bootstrapping. We had a paycheck, a tiny support structure, and a network of customers who could give us feedback. It was the best incubator setting for building a product.” Larsen explains.

The first demo was launched in 2011 and by early 2012, the company was ready to seek funding, realizing that they would not be able to grow organically, but needed a big push that would help them to build a sales force and other critical functions.

“We talked to a lot of VC firms in the United Kingdom and in Silicon Valley, but we were too small to raise funds there and we weren’t willing to move away from Copenhagen and set up shop. We ended up going with the Danish VC firm Northcap and raised $8 million kroner, which is when things really started to take off. We were able to higher a sales team that sold the product using inside sales, which was much more scalable. By quarter 4 of 2012, we were performing much higher than our expectations and landing big international customers. It was huge validation that we were on to something.”

The Keys to Success
For Larsen, the turning point for growth was when Falcon Social first accepted venture capital. Doing so marked a clear decision to scale and from there it was all about the speed of execution.

“As a startup, you have to be an absolute execution machine. Ideas are cheap. Anyone can get one, but very few people can go off and execute. As soon as a decision has been made, it’s critical that you are absolutely relentless in following through on it.”

Larsen acknowledges that another key to Falcon Social’s success has been the ability to build a great team that is not only talented, but also international today employing 33 different nationalities. He told us that Copenhagen has been a key-sell in terms of building a global team not only because the city has become more international in recent years, but also because it’s a very attractive place to live. 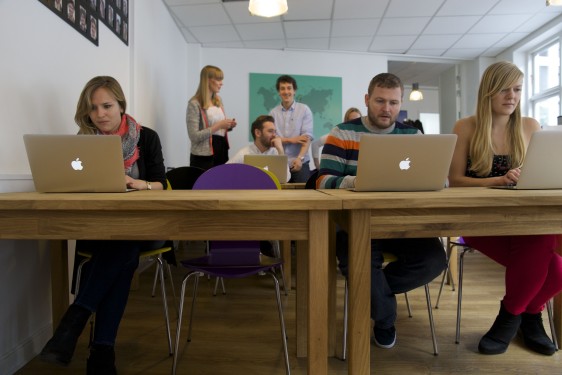 “We have made outside hires of people who are very experienced in certain functions, but we have also seen immense development of employees inside the company who have been growing along with us. There are a lot of different hats to wear and we are not afraid about delegating those responsibilities out. It’s impossible for the head of a function to do everything themselves, so it’s important that they feel able and ready to identify talent within their departments and give those employees responsibilities. This enables our employees to grow professionally and us to grow together as an organization.”

A recent inspiration for Larsen has been the book  The Hard Thing About Hard Things by Ben Horowitz.

“Horowitz’s book really resonated with me,” explains Larsen, “As startups, we are always telling the world how great it is going – how we’re killing it. We don’t always talk about the harder, darker side of building a business. His book explores what happens when dreams turn into a nightmares that you have to stay up all night to fix.”

Opportunities to Learn and Hear More
Larsen will be speaking at this year’s TechBBQ event on growth where he will talk more about his experiences with Falcon Social. He also attended last years event, highlighting that it was influential for him.

“TechBBQ brought together the whose who of the startup scene. I ran into all of the Venture Capital firms I had been talking to. There were great inspirational stories and I also met a guy who gave me some recommendations that totally changed my mentality and revolutionized how we do sales at Falcon Social.”

Networking Your Way Into a Startup

Wrap Up of the Nordic Startup Conference