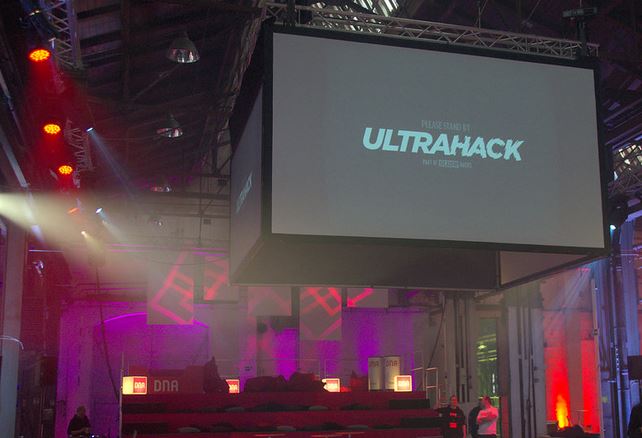 Ultrahack took place from 6- 8th November in Helsinki in anticipation of the massive startup conference Slush, and is one of the biggest hackathons in Europe.

Hackers from around Europe (and even some from the US) developed their ideas over one long weekend, before presenting them to investors in hopes of getting them off the ground, or in some cases, scaling them even bigger. Here are three interesting projects we hope to see more of in the future.

Sketchboard.io provides users with an “endless whiteboard” in the form of an agile software that can be used with large or small-scale teams or individuals and edited in real-time.

The company provides diagramming elements and basic drawing styles, so that you don’t need to concentrate on details. They want users to be able to easily get their ideas out, without having to worry about weather their venn-diagrams to get the most important out: your idea, and no need to worry about how it looks.

Founders Ernesto Hartikainen and Saiki Tanabe created Sketchboard.io in 2013, and have been working to improve the software from it’s basic form since.

“The software has been ready, but the integration to Slack was built during Ultrahack,” says Ernesto Hartikainen.  Check out the Slack integration here.

They already have over 50,000 users in 130 countries and got featured on Producthunt . There is a positive response to the product, so the creators are now focusing on raising awareness about the software and creating integration with other platforms.

Check out their demo below:

Codename Agents Unite wants to get people away from their computers, and to go outside and be social.  They hope to achieve this by giving people the possibility to play characters in a story and live the lives they dream of.

Creators Joonas Vanhatapio, Aleksi Pitkänen, and Joni Ahola have already created an invite-only pilot version of the app for testing.

“It is a new way for storywriters to create content and make their content com alive. We have created a platform that gets you socializing and moving in your chosen environment. You get the chance to create your own content,” says Joonas Vanhatapio.

The app is centered around missions.  “You can get a call anytime, anywhere, and when you answer it, it give you instructions to what you need to do. The missions are very scalable and there are millions of stories- because users can create the stories, through crowdsourcing,” he explains.

The platform also has possibilities for event organization, through the development of location-specific missions that occur during events.

“We want to make games realistic, moving in a fun way, get the feeling of success and have a better health and motivation.

The pilot stage of the project is scheduled to end late in 2015, with a launch aimed for 2016.

When Miils founder Katja Ratamäki‘s youngest child was born, he became ill from food Katja was eating.  After a frustrating half year, she ultimately had to cut her diet to only 10 ingredients to keep him healthy.  As he grew, Katja found herself spending an inordinate amount of time meal planning, as the risks of cooking the wrong meals were high.  Furthermore, it was difficult to figure out if the restrictive diet he had to be on was providing him with the proper nutrients.

Katja created Miils to assist with meal and recipe planning for restrictive diets.  The platform helps you find what you need, nutrition wise, and gives you recipes that fit your restrictions, helps create shopping lists, and can plan daily or weekly meals for users.  In some areas, users can even get their groceries delivered to their homes.

During Ultrahack, Miils integrated into the Fineli database, which contains information of the composition of Finnish foods, and added both the Finnish language and Finnish ingredients to their database.

The team is currently developing an iOS app and looking for partners.