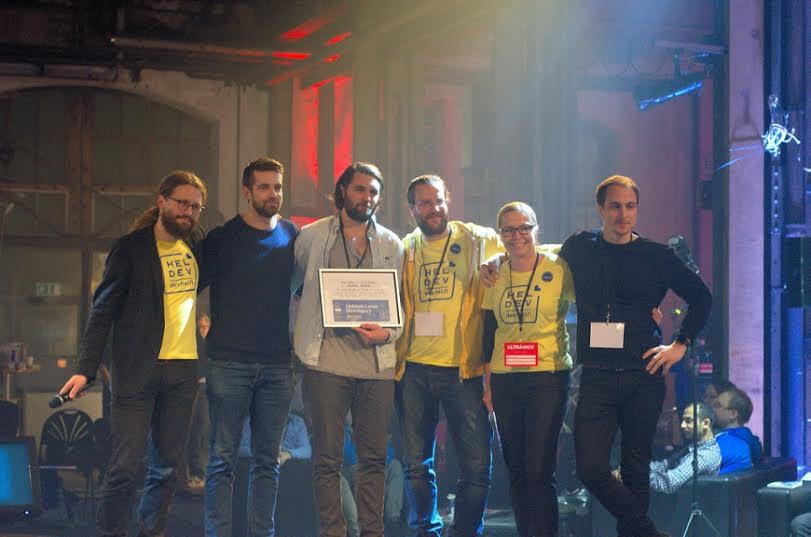 We met Routes at Oslo Innovation Week, where the founders pitched to investors and tried to grow their audience at the Afterwork Startup event at the newly relaunched co-working space MESH.

“We started out with testing the concept on an event in Oslo, a popular pub-crawl called Tom-Waits. We thought why not make a route for this pub-crawl and post it on the Facebook group?” says Andreas Bollestad Pedersen, Business developer at Routes. “One link and a few hours later, we were linked by the biggest newspaper in Norway and called “the official Tom Waits Guide”.

Although they are not a drinking official guide, the four members of Routes – who have named their team the “Routyfruiters” – believe in the possibility of simplifying travel experiences with their app, through user generated routes. Including drinking routes!

“The reason we wanted to build Routes is because we believe most travel apps don’t focus enough on user generated content,” said Andreas, “So we wanted to come up with something stupidly simple and addictive, where people immediately understand their purpose, which is to create and explore routes.”

The young team – all are between 24 and 26 – is composed of Andreas, designer Bendik Skotland Hansen and two developers: Michael Gunnulfsen and Truls Skeie .

Recently at SLUSH 2015, the team won the Smart City – Civic Tech track sponsored by the City of Helsinki and Open Knowledge Finland (OKF) at Ultrahack. Developers and startups were challenged to finding original solutions to the question: “what is happening in Helsinki and how can I be a part of it?”. Out of the  26 teams that participated, Routes won the €2000 track prize, business mentoring, and free office space for 6 months.

Can you tell us a bit about your app? When you started the project, why and what are the functions of the founders?

The project began at Startup Weekend in late February 2015. Routes is a social app where users create and discover a new form of travel guides. It’s simple, fun, and delivers awesome travel tips in an engaging and user-centric application. On top of the user generated guides, we deliver even more value by aggregating images, ratings, and direction services from third party services such as Instagram, Yelp, Google. On top of that, everyone can create Routes. Easy and fast. And all the routes are open without having to create a profile. You can share every route easily in social media and find them on google. Every Route has a unique URL and contains tailored SEO tags.

How does Routes differentiate itself from the existing travel app industry?

The travel app industry is huge with many competitors. We compare ourselves to apps that deliver travel guides. Our uniqueness is that we deliver a super simple niche-concept, “the route”, and we just happen to solve complex travel planning issues and inspirational content behind a simple interface. Call it Instagram meets Reddit in a conceptualized travel book.

In our native app, we focus on giving the users few choices. That way they don’t drain the brains “cognitive load”. This is often a serious problem with many travel apps. They give the user way to many options and scattered concepts, which makes it hard to decide, and leads to churn.

Your project has existed less than a year: how have you developed it over this period?

We are working full time in our day jobs, but we are in an incubator program through Norway’s biggest online classifieds site called FINN.no. In this program we get access to relevant resources like mentoring, advertising on Schibsted sites, IT infrastructure hosting and more. The program also gives the employees a lot of flexibility in regards of working with the project in their “normal workday”. We also have some friendly mentors that dig the idea and help us avoid common traps.

How does a user create a route, and to which extent will you supply with third parts contents ?

Most travel apps handpick the best content. We turn this around by stating everyone has a Route to make, and it’s up to the community to vote on what’s best. When the users create a route, we spice it up with valuable information such as ratings, pictures and videos, and lay it out on a map with direction info. The user can form the route as he/she wants with his/her own pictures and text.

When you make a route on the web today, the user add spots to the route through our searching system. A Google search happens behind the scenes, and we do the rest of the job by finding accompanying venues through third party API’s. The user picks what third party data he or she wants to show.

In addition, we are working on a system where we create a Route for the user, based on the activities he or she did that day. We believe this will drastically lower the barrier of creating a route, and we cannot wait to try this out.

What are the next steps for Routes?

We are currently building the native mobile application. This will be our main platform where people can use Routes when they travel. On the biz side we are working with attracting relevant partners to grow and build content. We use other social platforms to spread Routes and bring existing tourist communities to us. For the moment we are only in Oslo, but we are gradually expanding to other cities “behind the scenes”.

Pitching in Georgia – a hidden market for tech travel startups?