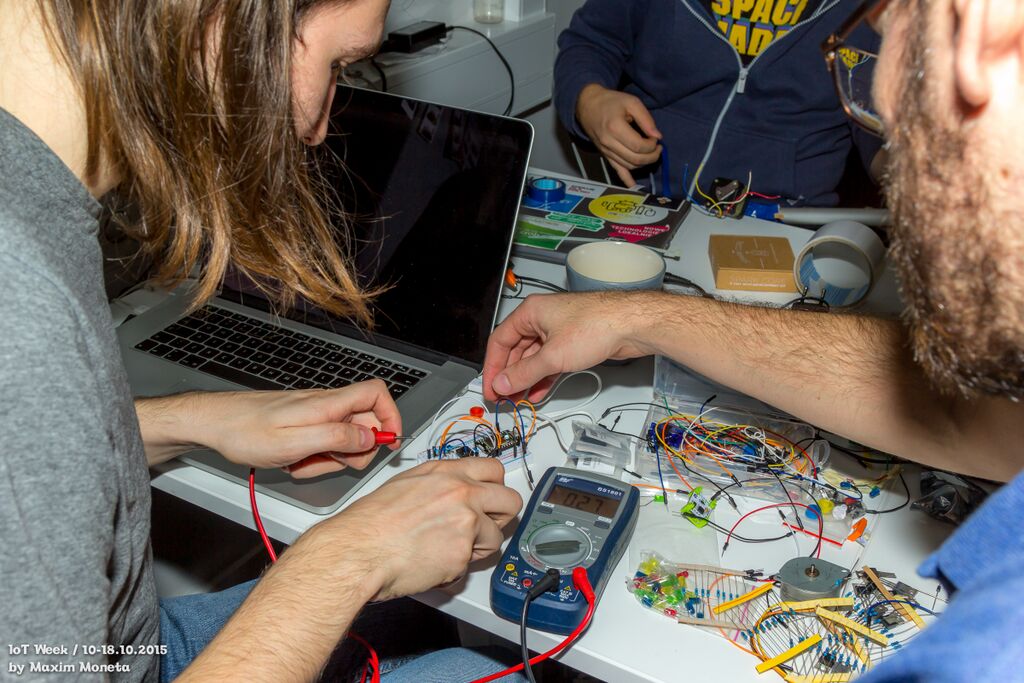 A blend of technology, talent and new ideas at the IoT Conference in Lund

This article was originally posted on Øresund Startups.

The rapidly growing IoT Conference took place in Lund last week. It is the second edition of the conference this year, after a successful initial conference back in April. Renowned speakers, both locally and internationally, were present to depict the landscape of Internet of Things (IoT) and talk about opportunities, challenges, and the future of IoT.

A full-day workshop focusing on IoT business models kicked-off the autumn edition of the IoT conference on Wednesday. On Thursday, the event continued with 21 sessions spread along three parallel tracks covering a broad range of topics, such as business models, security, standardization, connectivity, and wearables. The organization of the event was a joint effort between Øredev, Mobile Heights, and Ideon Meeting. The result was a unique blend of experience, talent, and ideas which confirmed the exciting potential of IoT.

“We want to show how broad and important the area of IoT actually is, how it will have an effect for everyone, not only in the tech world, but also across different industries,” said Linda Malmgren, Head of Communications at Mobile Heights.

Hannes Sjöblad, a tech activist and entrepreneur, started the sessions at Ideon by speaking about trends, biohacking, and the need to “make the human body an integral part of IoT.” Among the speakers there were local Swedish entrepreneurs like Dan Gärdenfors (Nobiz), who gave an insight into the user experience in IoT, and Nils Mattisson (Minut), who shared his experience from manufacturing products in China. Hampus Jakobsson held a very interesting talk where he urged IoT businesses “to go all the way,” offering not only data, but full solutions with insights and services. He also advised them to think first about the user and the problem to solve, instead of focusing solely in technology.

“We, as a region, should really think about accelerators and incubators that can help startups with working capital issues get off the ground,” shared Hampus Jakobsson in his talk “Business Models for the future of IoT?”.

Speakers from large industry actors, such as Sony Mobile and Ericsson, emphasized the importance of standardization in IoT and aspects which sometimes are overlooked by startups, such as privacy, security, and the availability of LTE (long term evolution) solutions for IoT. Vanja Plicanic Samuelsson, senior researcher at Sony Mobile, highlighted access and interoperability as the two main enablers of useful IoT products. In her opinion, what will make or break an IoT business is knowing your use case, and then picking the enabler technology accordingly. Along the same lines, Björn Ekelund from Ericsson drew attention to the need of local intelligence and security in IoT. He also introduced CALVIN, an open source application environment by Ericsson for IoT.

The event had its international flare with entrepreneurs Matthew Papakipos and Wilhelmina Jewell Sparks. Papakipos presented the home robot project he and his family are working on and gave a perspective of robotics within IoT. To wrap up the day, Sparks, founder of Strategic Diversity Group, provided a complete panorama of where IoT is heading, along with trends and market insights in her keynote session “Connected 2020: The Future of Things”. Overall, it was a very constructive event, which was all about sharing and learning, heading into the future of connected devices.

Over 350 participants, among whom were entrepreneurs, industry experts, investors and students, attended the conference. One of the organizers, Liza Nydén from Ideon Meeting, pointed out that the purpose of events like this is to attract competence by providing the experience of companies in all stages in the region. For startups, the IoT conference was a great opportunity to listen to people who have already gone through the same journey.

“I thought the presentations and the workshop were really interesting and very relevant, a lot of cool ideas, a lot of pathways to go. Everyone is very friendly, they want to meet you and see what you are doing,” said Andrew Lentz, founder of Serenity Siren.

If you missed the event, some of the main sessions will be soon available at their website. Meanwhile, plans are under way for the next IoT Conference which is already scheduled for April 2016.

“We are going to take the conference to the next level by adding a hackathon and work with the organizations around us so that everyone, both nationally and internationally, recognizes it as the place to be within IoT,” – Linda Malmgren.