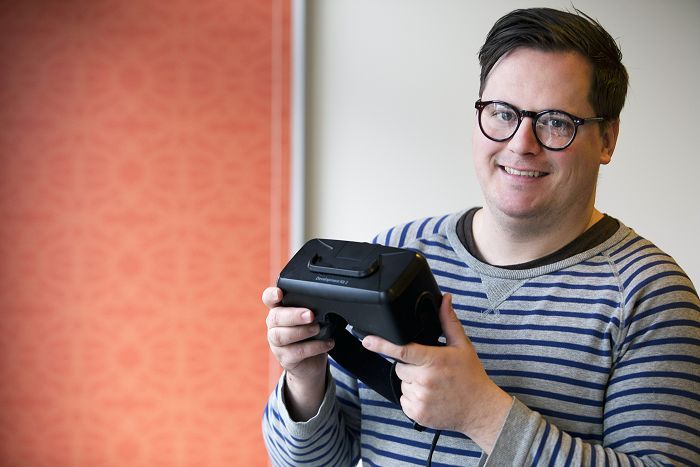 Icelandic startup Breakroom provides its users with a private virtual reality workspace for wherever and whenever they may need it.

A simple request: Imagine your current work surroundings. Next, imagine yourself working in a café tucked away on a peaceful and quaint street somewhere in beautiful Vienna, Austria or perhaps imagine yourself reading through work documents somewhere on a beach in sunny Bali with the sound of waves lapping in the near distance.

According to Diðrik Steinsson, founder of the virtual reality (VR) breakthrough company, Breakroom, this is indeed possible. Or rather, it will be, starting first quarter 2016 coinciding seamlessly with the eve of the release of VR hardware such as the much-anticipated Oculus Rift. As Diðrik stated during our conversation, “With the VR device, you are no longer at your desk; it can act as a fortress of solitude where you are able to pick the place you’d like to work”.

Diðrik Steinsson, a self-described “tech geek”, had worked in three open space offices with past jobs he had held. While open space concepts are in some ways arguably useful, the open space concept can also be a beckoning call for interruption. At times when one would like to focus on a specific task, the open space community can foster a more casual atmosphere that makes it all too simple for a colleague to burst in and intrude, albeit unknowingly, while someone is at their peak of focus.

Diðrik sought to find a suitable solution utilizing VR but the technology was simply not available to make this a reality, until now. This is something he had dreamt about for years, and with the advent of VR hardware coming to market it is the perfect time to execute his software application Breakroom.

In December 2013 Diðrik was able to give the Oculus Rift a try, and it was then and there that he figured the time was ripe for an application such as Breakroom. The Oculus Rift proved that what Diðrik wanted to create was actually doable, as the technology had finally become available to make his VR workspace a reality. After this point, he began to look for ways to find funding so that he could accomplish his goal.

He became part of the Accelerator Program in Reykjavik, Iceland and was awarded funding by a venture capitalist firm in Iceland called Eyrir, which according to Diðrik is, “one of the most respected venture capital firms in all of Iceland”. As Breakroom specializes in technology development, they were also able to receive funds from the Icelandic government, which gave them the much-needed breathing space they needed to further create their company.

With three friends, he started Breakroom in 2014. Back in his school days, Diðrik studied project management and did a lot of experiments at this time to see what variables would increase productivity. He truly believes that there are so many tools that technology is helping to make better, and that VR will serve to bring many good things to the table, in particular to project management.  “Employees are becoming more efficient with technology. Companies and management have more tools to make productivity better”. He also believes VR will serve to create a huge change in the face of modern companies within the next 3-5 years.

The balance between VR and reality

As with any new technology there are specific things that will need to be addressed. The first thing that comes to mind is how many hours one will have the ability to work from Breakroom utilizing a VR device. Diðrik stated that working “two to three hours with Oculus Rift can give you eye strain”, so Breakroom is speaking with other companies that may be able to offer a better solution for them in terms of higher resolution around 4K. The 4K resolution will allow people to work best with work documents.

Still, high resolution or not, Diðrik advises that, as one who has utilized VR headsets quite a lot, anywhere from two to three hours at most per day is more than sufficient.  There is much that is unknown when it comes to viewing a monitor that is a mere 5 centimeters from your eyes, which uses magnifiers to see everything . Humans are not accustomed to having everything in focus at the same time.

Diðrik takes his work responsibility seriously and believes that with Breakroom, “You’re not making an application, you are creating an environment, and so you need to think about all of the things that can affect humans”. Breakroom has worked with environmental pychologists so that they are able to deliver and receive the “correct response” from the user. Their overall goal is “to create a relaxing environment that helps to increase your productivity output”. With that said, colors can change the way you feel, so working with the environmental psychologist has been a particularly rewarding experience. “He has given great advice on what the environments should look like, which sounds should be prominent, and what colors should be utilized,” says Diðrik.

Taking VR from video games into your business

“It’s kind of unexplored territory”, explains Diðrik, “many developers are creating VR for video games”, but Breakroom is focused on a different market altogether. In the first quarter of 2016, Breakroom will be available as a mobile application followed with projected availability on desktops in the fourth quarter of 2016. Part of the makeup of Breakroom’s business consists of business-to-business while the other portion of their business is direct to consumers. Breakroom is already working with companies that want to integrate their VR solution into their workplaces.

“I think it will be very valuable for companies with marketing materials; with VR you can visit all kinds of places without having to leave, it’s like you’re going on vacation,” he says. This, of course, would be the business-to-business side. On the consumer side, they see a market for consumers who may want to further enhance their environment say when flying on a plane or other such situations that being able to exert a bit more control over your surrounding environment can be beneficial.

Diðrik highly recommends that people come and visit them at their headquarters in Iceland to experience the Breakroom VR software for themselves. They have received mostly positive reviews, as people are more than often surprised at the versatility and usability of their VR software.

Diðrik thinks that one of the key things to getting a startup off the ground and attracting the right people is to really emphasize focus on getting the correct board of advisors. His advice to startups?

“You can’t put a value on it, they’re like coaches. Having these advisors has probably been the most valuable thing for our company.  Don’t just find great names on paper, but find people that want to commit something to your cause.”

“To do something like this you have to have a strange mindset, to the point that you throw any negative thoughts of not doing it away”.