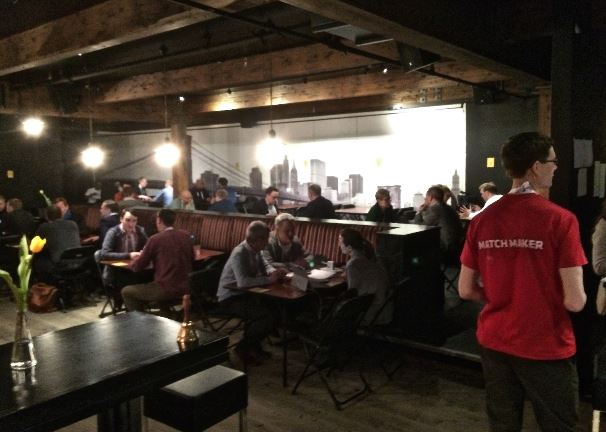 Live from Media Honeypot: I visited the deal room just before lunchtime and talked to Tuomas Maisala from Spinno, who was tasked with overseeing the matchmaking process.

Though busy, the large room was running like clockwork.  Tuomas has years of experience under his belt arranging such events and whilst it was mainly an automated process, it still required talented human intervention from Tuomas and his trusty band of friendly volunteers to keep to the tight schedule and to arrange (and re-arrange) extra meetings as the need arose.

It was a hive of activity at midday. Twenty-five tables were neatly laid out and most were populated by attendees, deep in discussion. More than half of the tables were pre-booked for the short meetings held between promising tech start-ups and their potential media customers. Some meetings were between media companies themselves, from different parts of Europe, sharing knowledge and hunting for opportunities. The remaining tables were filling up with the ad-hoc meetings.

An impressive three hundred and twenty meetings were pre-booked through the Media Honeypot website and even by midday, it was clear that an extra hundred-and-fifty to two hundred short meetings would be arranged in the room by the end of the day.

The deal room was clearly an important part of the program, running continuously throughout the day, in parallel with the speaker sessions and demo area. Time will tell how effective the meetings were, but by the general buzz, there is every chance of success.