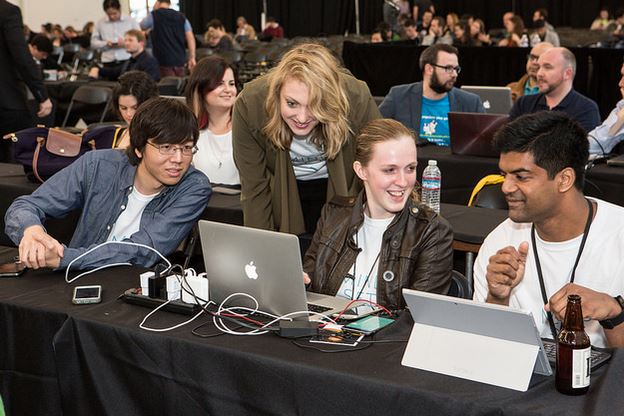 SXSW recap: a week of crazy

Earlier this month, a #nordicmade delegation of 30 Nordic startups attended the LAUNCH Festival in San Francisco.  The tour, organized by STARTNordic, was part of an initiative that promotes the Nordic startup scene by connecting it to other startup ecosystems around the globe.  Juraj Pal of Sure gives a recap of the festival.

Juraj Pal is a founder of Sure, a free personalized, messaging service that is powered by human-assisted artificial intelligence and machine learning.  The service aims to free users from frustrating online searches and clumsy app navigation.  After their launch a half year ago, their AI integrated technology caught the eye of STARTNordic, and they were invited to join the #nordicmade delegation at the LAUNCH Festival.

We caught up with Juraj in the midst of recovering from his jet lag and interviewed him about the experience.

Did the Launch Festival meet your expectations?

It sure did from the inspirational perspective – meeting Jason Calacanis, founder of the LAUNCH Festival and the host of ‘This Week In Startups’ as well as other founders was extremely energizing and motivating. We also managed to set up number of meetings with some of our partners, including IBM who had a huge presence at the event. That being said, the conference wasn’t the only motivation for going to San Francisco. Our primary goal was to test the market compared to the European market we’ve been focusing on and connect with potential partners and fellow startup founders.

Your startup uses AI and machine learning. How was the LAUNCH ecosystem approaching this specific themes?

As you can imagine, AI & Machine Learning startups were well represented at the LAUNCH Festival. IBM had huge presence at the conference, especially with their cognitive technology system IBM Watson. This also gave us a great opportunity to connect with developers from the ecosystem since our AI-supported recommendation engine leverages the IBM Watson API.

Same goes for the era of human-like AI in the form of virtual assistants, like Sure, fulfilling your need through a conversational interface. Familiar examples are Magic, Operator, and Facebook’s ‘M’ but it became obvious that this space is getting crowded and we’re competing with time.

What were  you looking for at LAUNCH and did you find it?

Our main goal was to validate the concept in US market and although not representative of the rest of the country, San Francisco was great for this given the high adoption rate of new tech products among consumers.

When not demoing our product to potential users, we were busy meeting with other startups or potential partners including Facebook and Caviar (acquired by Square).

We also managed to connect with the Danish startup community in San Francisco, including Zendesk, Soundboks and representatives from the Innovation Centre Denmark.

Without generalizing too much, Americans are often better at selling their ideas.
They are more outspoken and aren’t afraid to ‘fake it till’ you make it’! On the other hand, I think that they sometimes have it easier with the size of market they operate with and the way people adopt new technology and products. However, with the density of startups and ideas as in San Francisco and the area, you really need to have your sh*t together when talking to people.
Furthermore, they are not afraid of helping each other and are very open with their networks, offering to connect you with the right person. It was a pleasure to be part of the #NordicMade delegation with the other startups that are all showing the huge potential that is coming out of the Nordic region.

Now that you are back, what are you focusing on – is there some contacts/ ideas you could take from the event that gave you some new directions when building up your startups?

We launched the beta of our Facebook Messenger integration last week exclusively for San Francisco and now we’re working hard to bring it to Copenhagen in the next coming weeks too. Together with that, we’re continuing the dialog with many potential partners we met at the LAUNCH Festival.

Any startup that caught your eye?

SXSW recap: a week of crazy