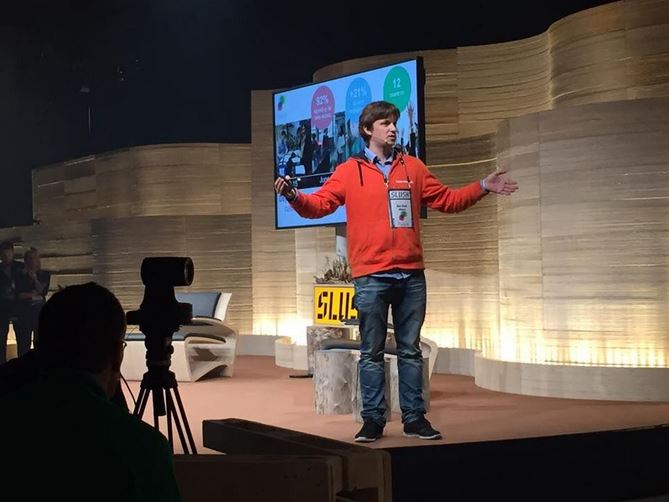 The pitching competition at the massive startup conference Slush is high stakes and high pressure.  After some stressful preparations, I was called onto stage to pitch my start, EdTech Foundry, in front of an audience in hopes of winning an investment.

Last night ended on a high note, and I felt ready to pitch. But in the morning, will all the preparation pay off?

It’s all about your own feelings

Waiting backstage to pitch, I suddenly realize – I had forgotten to eat. That usually means stuttering. Luckily they had plenty food and drinks backstage. I grabbed as much sugar I could. Buns, energy drinks and even pure sugar. That gave a enough boost for some minutes. Most likely, it is just a mental thing, but I had to remove any possible excuse for not performing at my best.

When I was called on stage, I felt prepared. A good feeling. I knew I could do my pitch in 2m30s. That gave me the balls to start my pitch by saying nothing. I just waited for something that felt like ages, but I guess was just some seconds, to show the audience I was in control. Most people just rush straight to it. I started with some silence. What others think don’t really matter. It’s all about my feelings.

I had decided to look people in the eyes every time I stuttered, smile at them and show I really believed in what I said. In my mind, stuttering only shows true passion. I am so dedicated that I get on stage and pitch despite my difficulties. The irony with this mindset is that I stutter less. The pitch goes on pretty okay. Nothing unexpected happens. I just say whatever feels natural. The same things I’ve said over and over the last 15 hours. Instead of thinking about what I’m saying, I focused on slowing down and feeling the room.

Only 20 of the 1.700 startups were selected for the pitching semifinals. I was pretty sure we would not make it. My startup, EdTech Foundry, are building the most engaging learning platform in the world. The case and market is pretty complex and requires insight to understand. Some investors have advised not to pitch and only book meetings for this exact reason. More time to explain all the cool stuff we are doing, how we change the education from passive to active learning and the unique cooperation we have with BI Norwegian Business School as the pilot customer.

Despite my belief and advice from some of the investors, we made it to the semifinals as the only Norwegian startup! Crazy stuff. The semifinals is the next morning. This time I got 5 minutes to present and 3 minutes for Q&A. This time there are no slide restrictions, but the deadline for sending slides is just in 4 hours.

The the routine is the same as last time. Send general slides that allow me to tweak my story, go home early from the party, fix the pitch before I go to bed, talk to the mirror, visualize and work on my own feelings.

It’s all in the preparations

I stuttered a bit more in the semifinals, but I do not think that was the reason we didn’t make it to the finals. I could have prepared better and worked more on what to present – not how to present. But based on the feedback that our case was better presented in a meeting, I am thrilled to both be a pitching semi finalist and also to become an IBM Award finalist, a Top 10 Edtech Startup, and invited to a TeliaSonera event as one out of only 20 startups.

Looking back, I have come to an unexpected conclusion. Pitching is rarely about the pitch itself. It’s all about preparations. The better prepared, the better pitch and more natural it seems. If you work hard, even a guy that stutters can do decent in pitching. That’s valuable insight.