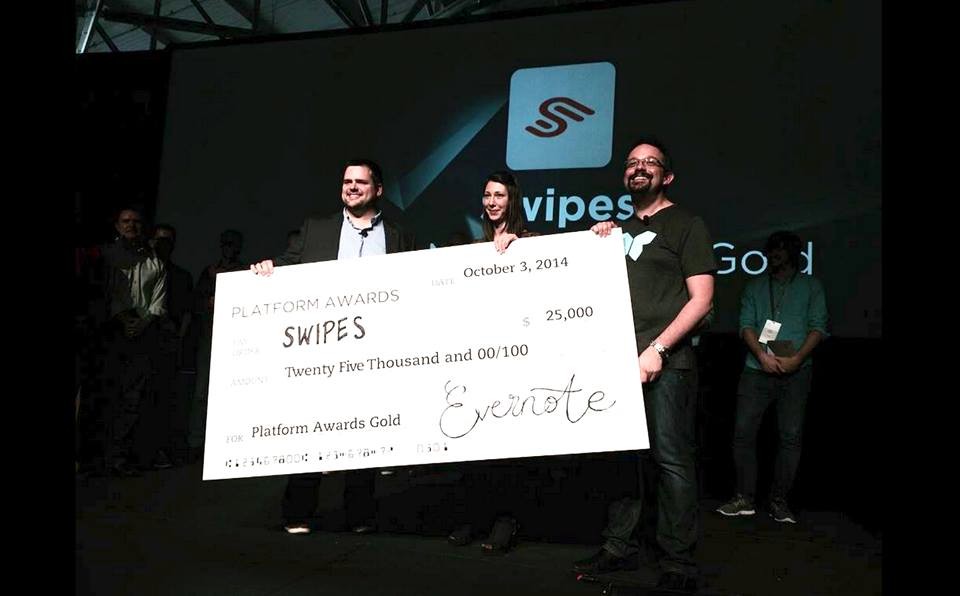 Danish startup Sharingear is all about more music, more tours and less back pain.

The Danish startup Swipes went all the way and secured the gold medal in the Evernote startup competition in San Francisco.

“We fucking did it”

That was the Facebook Message that hit our phone 2 AM the morning between Friday and Saturday from the CEO of Swipes. Later that morning Nordic Startup Bits got a change to talk with Kasper Pihl Tornøe and Yana Vlatchkova

“It was a close call, we think all the help we Got from our community especially Denmark helped us”, Kasper Pihl Tornøe, tells NSB when we catch ham for a quote after they are named winners. Kasper tells us he made a small script that helped the Swipes team to count the score between them and their competitors in the competition Blogo.

Every year, some of the most talented developers in the world compete in Evernotes startup competition. Together, they build the most apps that integrate with Evernote. Finalists are carefully selected by Evernotes judging committee and invited to the annual Evernote Conference to pitch their app to the community of users.

As mentioned above one of this years participants were Swipes from Denmak and they lived up to their own mission – to achieve High.

Swipes launched a integration that collects all tasks from notes in Evernote and puts them in an manageable action-plan in Swipes. Solving a common pain for a lot of users, Swipes has already built a good community around its brand.

“We are really humbled by the prize and generally so thrilled that there are so many people that share our beliefs and support us! Evernote has done an amazing job to give its partners an opportunity to grow along with them.” – says Yana Vlatchkova, co-founder of Swipes.

As a finalist, Swipes was invited to pitch on-stage at the Evernote Conference in San Francisco and compete to win the audience’s votes and the overall prize of $25,000. The Danish-Bulgarian startup won the hearts of the audience by solving a common pain for their day-to-day work.

“On the first day of the conference, we pitched Swipes to an audience of 1500 Evernote users and partners. A lot of the Evernote users have problems with managing their tasks related to notes and the powerful story we pitched made a lasting impression on them. The conference was highly focused on Evernote for Business and we met a number of Evernote Consultants who were very excited about introducing Swipes to their clients. During the conference we created a lot of new opportunities for partnerships, which is one of the key things Evernote helps with.” – explains Yana Vlatchkova.

As part of the award, all finalists were flown to San Francisco and besides the conference, they were invited to visit Evernote’s office in Redwood city.

“In the first days of our stay in San Francisco, we visited Evernote’s office. I was very impressed by how the office was organised in a way that nurses a highly productive environment for each person working there. I loved how passionate people were, especially the guys from the Partnerships Department – Gervis Cash and Chris Traganos, who helped us in every step on the way. The competition is just the beginning of our collaboration and we’re very excited about the future. Our next step is to get Swipes in the hands of more Evernote users as possible and help them achieve more in their day.” – comments Yana Vlatchkova.

We applause Swipes and are proud be a part of the Nordic ecosystem when startups like Swipes are archiving high.

A Swedish startup wants to make the Internet a safer place

Danish startup Sharingear is all about more music, more tours and less back pain.

Gold to Swipes at the Evernote Platform Awards