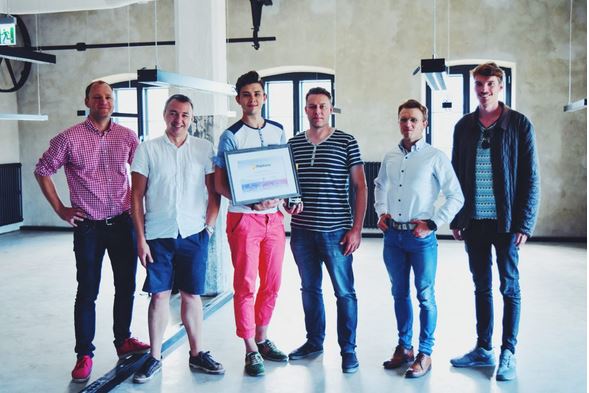 “Fundraising isn’t hard. At least not hard like impossible,” says Shipitwise.  Sander Gansen tells the story of how Shipitwise succeeded on the crowdfunding platform Funderbeam  to raise €176,000 below.

As we were going through Startup Wise Guys accelerator, we met a variety of mentors and investors. But there was one we particularly liked. It was Kaidi Ruusalepp!

She showed us her vision on how startup investing should be like. And we thoroughly believed every word she said!

Crowdfunding is nothing new. Giving a chance for friends, family (and fools) to invest in one’s company is a no brainer. But giving investors on-demand liquidity through a secondary market – that’s awesome! Only imagine the change it brings…

Firstly, investors with a low risk-tolerance can invest into startups. And then sell their shares only a week or a month later. Earning some quick cash. Giving an opportunity to buy for those that had missed the first time.

Secondly, future investors can see how the early-market has reacted. Whether there’s been a constant growth in the average trading price. Showing there must be something in what the company’s done right. Or there hasn’t been any activity. Possibly demonstrating public’s lack of interest in what the company does.

And thirdly, making it possible for founders to buy some of their shares back. At any given moment. While also giving other employees a chance to get some shares much before their options would get vested.

But there’s one more thing we especially liked. The fact that there hadn’t been any startup that had yet tested this idea out!

We were able to make history! To be the first startup on Funderbeam…

Using tried and tested strategies on a new platform

Shortly after Kaidi’s presentation we started to discuss how to run our first fundraising campaign on Funderbeam. And we wanted it to be ready by the time we had our Startup Wise Guys’ Demo Day in April. This meant, we had less than two weeks to get everything ready.

Firstly, Kaidi and her co-founder came to visit us yet again, trying to understand whether we’d be a fit. We discussed our journey until that moment. Our ideas for the future. The people on our team. And what we’d do with the money. In the end, they promised to send us the documents we had to fill.

By next day, the first draft was already sent back to them. They asked all the regular questions. What’s the problem? How big’s the market? How do you solve it? What’s the competition like? Why do you think you’ll succeed? Etc. And we nailed it!

Afterwards, they opened our syndicate at the Demo Day. Giving us an opportunity to include this in our pitch’s ASK. Everybody in the room was given a chance to invest into us, starting with as little as 250€. And by the end of first week, we had already collected 30’000€ worth of interest to invest in us.

What does interest mean? Apparently, investors first need to indicate how much they’d be interested to invest into the company. Based of that, the company needs to make an offer. And after it’s been accepted, the investor needs to wire the money.

Yes, this system could, and should be made a bit easier. But it works!

By the end of the first month, we’d gathered over 100’000€ worth of investment indications. And a month later, it’d reached to €221k. With 152 interested backers.

We sent out the real investment offers. That we ought to have sent out earlier. And had to go through the fundraising process all over again. Trying to close everybody.

What did we exactly do to get it done?

Setting up the campaign was the easy part! The real work started with getting all people know about our fundraising endeavor. And this can be quite hard, when you’re the first one at anything. Yet again, more rewarding!

Four more companies opened their campaigns shortly after we had started. Huntloc. Paytailor. SportID. Sportlyzer. And even though the first two of those failed in their attempt to get investors excited, more and more people now got to know about Funderbeam.

But what did we do to become the biggest crowdfunding campaign in Estonia until this moment? That’s simple:

We visited various startup events across 5 countries. Arctic15 in Helsinki. Latitude59 in Tallinn. Login 2016 in Vilnius. Pioneers Festival in Vienna. Startup Wise Guys’ Demo Days in London & Tallinn. And many smaller ones.

We held over 100 meetings with potential investors. There was 22 meetings only in Vienna. And another 18 in Helsinki. We even hosted all investors of Latitude59, organising a free to attend Cognac night for them.

We targeted 400 investors to constantly see our Ads every time they visited Facebook. Saying what? That we’re fundraising. And they have a chance to join. Simple!

We sent out around 2000 emails to all people we knew that had money to spare. Our personal friends. All the CEOs of Estonian startups. Investors in Startup Wise Guys list. And kept on pushing all that had showed an indication to invest through Funderbeam.

And we also got some press to write about us – ArcticStartup, CoFounder Magazine, Geenius and Postimees. While also keeping our own blog and social media very… We mean VERY active!

And that’s how easy fundraising was for us…

This article was originally posted on the Shipitwise blog.

Infographic: A closer look at the fintech industry

Pitching in Georgia – a hidden market for tech travel startups?