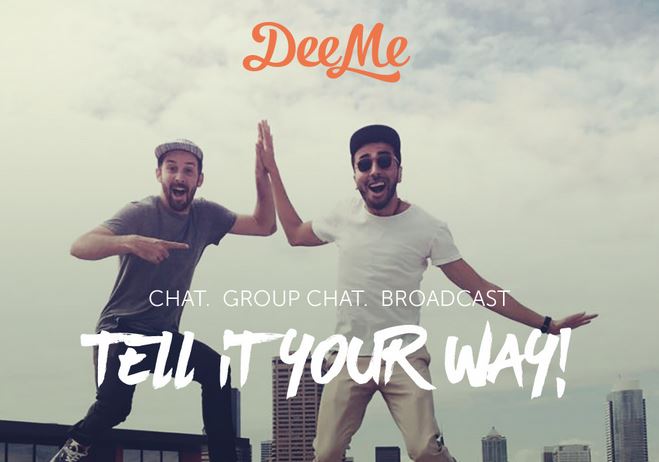 We spend more time messaging on our phones than ever before.  What would the most amazing visual messaging service look like?  That was the question Norwegian company DeeMe, founded in 2014, started from.

“This question became the DeeMe project, and today our vision is still the same.  The world of social media is in constant change, and we keep on developing DeeMe to be the most amazing social messaging service out there,” explains cofounder Kenneth Rasmus Greve.

The team behind the social messaging app consists of three Norwegian friends: Greve, Morten Strid, and Frode Alver Nilsen, who all share a background in design, creative marketing, PR, communications, and programming.

Therefore, it comes as no surprise that DeeMe aims to combine the absolute best features in messaging.  The app is a collection of the top characteristics of WhatsApp and Snapchat, while DeeMe adds their own twist to it, enabling users to send messages in image form. The whole service is topped with beautiful Scandinavian design, enabling the user to put together amazingly stylish messages.

In 2015, DeeMe won the Slush IBM Cloud Startup Award, and Mashable has listed it as one of the five can’t-miss apps.  The company has got big support from Innovation Norway, a governmental institution providing support for upcoming startups.

Differentiation and passion are key

“Most people are affected by stories in the media, which can lead to them aiming for the wrong purpose – to build a company, sell it, and get rich.  But for us this is truly a passion.  We want to build DeeMe into a favorite tool for people all around the world to stay in touch with.  So my biggest dream would be to take the subway in New York or walk around in Tokyo and head the distinct sound of people getting a new message on DeeMe,” says Greve.

When it comes to the future plans of the Norwegian company, there are some “cool secrets” on the roadmap still to be unlocked. But before those dreams can be realized, the team is aiming to close the biggest funding round in its history.

“We don’t want to lose the momentum.  I hope and believe that we will close this round quite soon.  Some of the investors we’ve discussed with have been in constant contact and are now happy to see our results,” Greve gladly states.

The future will show whether Greve will head the notifications of DeeMe beeping on the streets of Tokyo.