These are the enthusiastic words of Danish entrepreneur Nikolaj Astrup Madsen. Nikolaj runs theWorkaway Camp that is going on in Barcelona right now, and will also be hosting Workaway Camp in Morocco in January.

Everybody knows that great relations can be the most valuable thing for you personally, your career and for your company. There is no reason to discuss why you should work on growing and improving your network, so this article will give you some other methods for networking and some hands-on tips on how to go out and actually do it.

First of all, it is important to be clear about two parts of networking: growing and improving. Growing is getting more people in your network. Improving is bettering relations with those people you already are connected to.

Many only focus on one of these things. We all know the guy who introduces himself to everyone at a conference and shares more business cards than asking questions about the other persons. These kind of people normally have a lot of connections on LinkedIn, but few real, valuable connections.

A great network is a combination of growing (meeting new people) and improving (getting to know those in your network better).

Improving your network and how you get to the magic zone

I made this funnel to describe how I see the different steps and types of relations. Most people are connected to a lot of people and a few great friends. I look at networking like an ecommerce site. You get a lot of people in to the site and then work on getting as many of them as possible to buy something. You do this by improving every step in the funnel. 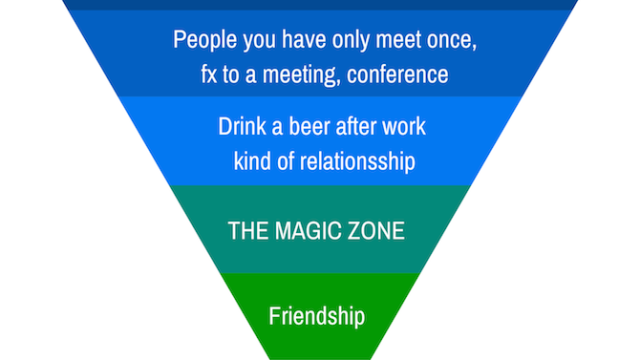 The same thing applies when talking about networking. It is easy to get connected and just meeting a lot of people. That is the top of the funnel. Now you have to improve every step, to get most people as close to the bottom as you can.

This is a really simple model, but it can help you see networking in a new light. Be aware of the fine line between friendship and networking. That is really the magic zone. When your relation to a person is in this zone, they are more likely to help you, advice you, recommend you and share their knowledge.

I would actually say, that they would be willing to help you more regarding work related issues, than if they were down in the 100% friends category. Why is that? It’s because many people try to seperate things and don’t want to mix business with pleasure. Which is too bad, because that is where the action is.

This model can also help you be aware that network is not just meeting people. Real networking is knowing people, talking with them, helping them etc. All the things that friends do.

Stop throwing business cards around at one day events and start getting to know people.

We have all been to a lot of one day event, where we want to “network”. The reality being that it’s damn difficult. So many people, so little time. I’ve tried different things to meet new people. In general people really appreciate if you do something that isn’t traditional so that they feel special. You will stand out and be remembered, because 99% network like it’s 1999.

These ideas are not breaking news, but simple and hands on. All of these things you would be able to start today.

Do something for free

A couple of years ago I did a free online marketing course for 15 people. I rented a conference room and invited people via social media. Actually, I just wanted to see if speaking/teaching was something I should do more of, but it turned out to be a great network thing.

I have had contact with these people the last few years; they follow me on social media sites. In total I have sold five spots for Workaway Barcelona and one spot for Workaway Kilimanjaro to these people. So it has been good business, but what I have noticed is that these people are really helpful – more helpful than the average person in my network.

I think this worked well because it’s not normal for one consultant to just book a conference room and invite people to a one time, exclusive seminar about online marketing. You normally only see this done by bigger agencies, where hundreds of people join.

Invite people out for dinner

My friend and I did this once and it was great. We both invited three people that we didn’t know, but wanted in our network. We wrote something like “I am having this casual, networking dinner and would like to invite you. I have been following you on social media and would like to meet you”.

People were really happy to receive the invite and we were 8 people at the dinner. Everybody was working with online marketing / entrepreneurship in some way. An investor, a developer, a communications guy and some entrepreneurs. It was a great evening where we got to meet some great people and it seemed like people were flattered that they got invited.

Compared to a conference, where you get to talk with a person for five minutes, this was a great first meeting with these people. I am sure that these people will remember me better than some random dude, they talked to shortly at a conference.

Again, it really helps to stand out and just show some sincere interest. The dinner wasn’t fancy or anything, so the expenses are small compared to the great network you get.

In the perfect world, this is something you would do each month.

Pay for the big shots time

Busy and important people, get a lot of offers and emails, so it can be difficult to get to know those kind of people. Most entrepreneurs are fighting to become a big shot and getting advice from one who is already there can be game changing.

All of the big profiles I have talked with, tell me that they receive a lot of “offers” for a coffee meetings or for a 10 minute call. Many of these offers don’t have anything for the profile. People are asking for the profiles time and advice, without giving anything back.

When you want to stand out and get the attention of a person that is high profile, just simply email them with an offer to pay for their advice for 30-60 minutes via Skype. These kind of people loves talking and giving advice, but they hate being used and trust me, they know what they are worth.

I have done this several times with specific challenges, where I wanted to learn something. Every time I have done this, it has been received very nicely. Everyone has accepted the offer and several told me, that they would do it for free. People don’t mind helping if you just appreciate them and you do that, when you are willing to pay for their time.

This is a great way to meet someone that is not normally realistic for you to network with. Of course you can get some valuable advice, but this is also just a great way to let the person know about your project.

This is a fun little “trick” that has worked really well for me. Back home in Denmark there is an annual conference about online marketing. It’s the biggest event on the topic in Denmark and most people are there.

One year I noticed that there was no warm-up event the day before. I know that conferences are hectic and that you normally don’t get time to talk with all the people you hoped so. So the idea was just to arrange a very casual “dinner and drinks” the night before. Many were already in town just sitting at their hotels, so why not meet up and talk business.

I asked the manager of the event if it was okay and he was happy that I wanted to do it. I booked some tables at a café and did a blogpost on my private blog. The manager and lots of the profiles that were at the event to talk shared it, so a big percentage of the people going for to conference had been to my blog before the event, they knew my name and face.

Again, it was an initiative that stood out, where I didn’t ask for anything but just offered something.

It is really difficult to say what these things have meant for my network, but these things are so extremely simple, don’t cost that much (or are free) and the value is great.

This was originally posted on the Workaway Camp blog, read it here.